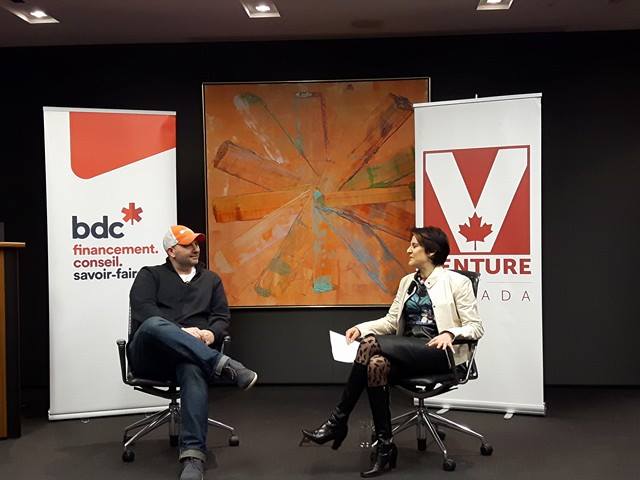 “Thanks for taking time on IWD to celebrate a privileged white man,” Zifkin joked as he walked up front.

Routinely cited as one of the most generous ecosystem builders in Toronto, Zifkin is a board member of Ladies Learning Code, a national nonprofit that teaches women and girls to code; a member of the Upside Foundation, a charity where companies donate equity to charity; and Hubba is the lead sponsor of Venture Out, Canada’s first LGBT-focused tech and entrepreneurship summit. Hubba also recently announced that it is partnering with LLC to launch a coding curriculum at the Nellie’s women’s shelter.

He’s clear about the world he is trying to create, and in his talk, he shared his advice on how to build an ecosystem, what he really thinks about diversity and inclusion, and shared the personal experiences that gave him his trademark awe-shucks demeanor.

“There has to be someone who makes the decisions.”

“My secret sauce is that I believe I can find talent in the rough, and convince those individuals to work with me.

Too often, a young company will look to consensus-based decision-making processes among co-founders. It feels good to have everyone be a part of the decisions for the company, and it can create a feeling of equality. Zifkin, however, believes that this is a false narrative that will prove disastrous in your organization over time. Regardless of equity share on the backend, someone needs to “have the elephant sitting on their chest and needs to make the decisions.”

Of course, this does not mean Zifkin supports authoritarianism; far from it. The best idea wins out at Hubba, regardless of the seniority of the person who suggests it. Further, everyone in the organization is beholden to keeping each other honest and keeping egos in check. Even with processes in place to discuss ideas openly and a culture that embraces logical and respectful dissent, great ideas are heard but ultimately someone still needs to make the final call.

On scaling your company

“Running a company sucks,” laughed Zifkin, as moderator Daneal Charney asked him about the joys of running a fast-growing company. “We do ourselves a disservice by glamourizing the process of building a business.”

“But Hubba is going to be a billion-dollar company, no?” eggs on Charney.

“Oh, it’s going to be way bigger than a billion,” retorts Zifkin.

When it comes to scaling up a company – and with it, its people – Zifkin had profound advice.

“It seems that Toronto does not have a start-up problem, we have a finish-up problem.”

“We need to change the script to take communities not currently in tech, and get them into the [tech] industry. We have amazing lawyers who should be in tech. The same for teachers and other professions. We also have to think about how to get underrepresented people into tech; they’ve been left out, but they are a goldmine of talent.”

Ultimately, he says, companies require diversity of thought to survive, so a CEO’s job is to create an environment where smart people can not only do great work, but also where people can be their true self. Logically, this comes from seeking people with different identities, life experiences, socioeconomic statuses, and other differentiating factors that likely mean that the individual sees and thinks about the world differently.

According to Zifkin, though, world class talent has one core question when it comes to choosing where to work: are winning companies there? This mantra helped build up Silicon Valley and, Zifkin believes, will be what draws global talent to Toronto as more multi-million dollar tech companies are founded and scaled here.

So how do you retain such a great culture when you’re scaling up? “Find what’s special or unique about your culture and protect it as you grow.”

On cutting out early

“It seems that Toronto does not have a start-up problem, we have a finish-up problem,” said Charney, half joking about how easy it is to start a company, but noting that the Canadian tech ecosystem lacks larger companies.

When trying to identify why Canada does not have many multi billion-dollar “unicorns,” many are quick to suggest that Canadians “cut out,” whether that is selling for lower valuations, or moving to the US because they’re scared to take on the global market from Canada.

Zifkin thinks about it a little differently and, perhaps, a little more logically.

“Look at the mental math,” he says. “A founder works hard for a certain number of years and gets an acquisition offer. He or she calculates they will end up with X dollars based on their equity stake. Then they look at raising more money to scale. Given dilution, even if the company valuation increases 10x, their in-pocket cash will be similar or the same, so people look to take some money off the table earlier.”

Thinking of it this way, though, offers a solution. As more Canadian entrepreneurs who “cut out” come back and found their next companies, they own more equity as they’ve been able to self-fund. Now when they raise a Series A or B, they retain more equity, and it becomes worth it to invest more years to hit a 10x valuation since their personal value will rise as well.

Zifkin shared two crucial mistakes he made in his first businesses: he only hired people identical to him (“I thought I was hot shit, so everyone should be like me and we’d be set”) and he involved himself in every decision (“I was insecure at the time, and didn’t realize I was bottlenecking the organization”).

Now he says he only wants employees to stay at Hubba for two years. “Then I want them to build wildly successful companies. It’s not only a great legacy, but it helps talent attraction to be known as the ‘startup factory.’”

"The number one characteristic we look for is empathy." @Ben_Zifkin #bdcseries

The contrast to the Zifkin of today versus the Zifkin of earlier companies showcases how he believes you build an ecosystem: empower others to be more successful because you were in their lives, rather than accruing more individual power and ego stroking.

Using the average 10x rule of recruiting (in each phase – applicants, qualified applicants, hires – your pool shrinks by a factor of 10), Zifkin notes that a scaling company will need thousands of applicants to properly fill its ranks, something that Toronto cannot currently sustain for multiple scaling companies at once.

However, this does not deter Zifkin. He says the three key elements of a successful ecosystem are great talent, seasoned entrepreneurs, and access to capital.

Toronto is hitting all three of them.

Southern Ontario universities and colleges already graduate more STEM students than the state of California, says Zifkin. Numerous Canadian entrepreneurs have built and sold companies but are staying in Toronto for their next ventures. And US capital is unlocking its doors for Canada, as Zifkin himself proved when Goldman Sachs made a multi-million dollar investment in Hubba’s latest financing round.

On humility and being humble

“My secret sauce is that I believe I can find talent in the rough, and convince those individuals to work with me. From there, I do what I can to give them the freedom to perform.”

Zifkin’s mentality on his secret to success is evocative of his belief in the necessity of having humility over being humble.

Being humble, says Zifkin, means not talking about yourself, deflecting attention, and otherwise making yourself small in comparison to your achievements. While this is often called the “Canadian way,” it can be toxic to an entrepreneur. At the earliest stages of a company, co-founders are often the only people talking about the company and its potential. Without that, you’re done.

On the other hand, having humility means being vulnerable, having empathy, and removing your ego from decision-making. This, believes Zifkin, is crucial to being a successful entrepreneur. If you cannot let go of your ego and create environments where people feel comfortable and are able to do their best work, you will not be able to scale a company very well.

When it comes to what’s next for Hubba, Zifkin has his eyes set on the world.

Disclosure: Stefan Palios is a co-founder of Venture Out

Technical textiles and engaging experiences: talking the future of retail with Kit and Ace’s JJ Wilson

Apparel companies are reinventing what it means to engage their customers. If lifestyle brands are about conveying an aesthetic and attitude consumers can aspire…