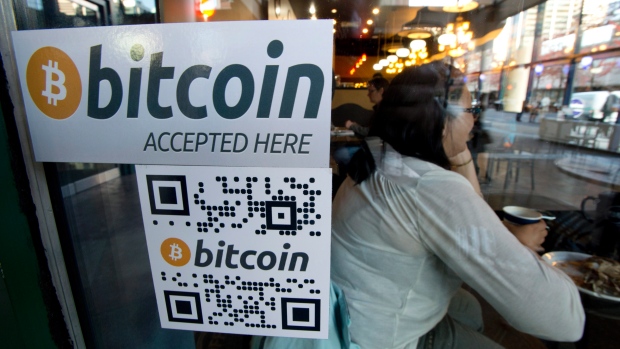 We’re not positive on this one, but it’s pretty likely that CBC Radio One 89.1 FM in Kitchener-Waterloo today was the first radio station to give Bitcoin over the airwaves.

It was a really cool little experiment that CBC KW did when they partnered up with a local Bitcoin merchant, Tinkercoin. Together they were able to successfully transmit Bitcoin over the airwaves to a lucky listener who called in. CBC called it “the first known transmission of the digital currency by a public radio station.”

As CBC KW’s Matthew Kang explained to us, a series of beeps were played over the air and listeners were asked to hold their phones up to their speakers and use an app known as chirp.io to decipher a code produced by the sound. They received a series of words which they could then use to “unlock” the Bitcoin.

The winning listener was Chris Skory of Rockland County, New York, who received 0.05 BTC, or $40 worth of Bitcoin. “I did not think that I was going to get it at all,” Skory told CBC KW. “I figured there was going to be some pretty stiff competition out there.”

Kang said that he was working on this story for CBC, in which he explained how Tinkercoin uses a rather unorthidox method of doing business with clients. Along the way the startup informed him that they could actually transmit the cryptocurrency over the airwaves.

“No one’s tried it yet but if you’re game we should try it,” Tinkercoin co-founder Trevor Creech told Kang.

“I talked to my executive producer and he was totally up for it, so we basically set it up that you had to download this app,” said Kang. “From what I’ve been told the sound is like a QR code, but it’s audible, and so we played the sound three times on the air and people had to hold their phones up to the speakers to get the sound.”

Kang’s original article about Tinkercoin revealed that Creech sells Bitcoin to enthusiasts and established investors alike in the KW region where a Bitcoin ATM doesn’t exist.

But because he doesn’t work out of an office, he often meets clients in coffee shops, making it resemble a drug deal at times. “Essentially two people sit down, exchange a significant wad of cash and they both check their phones and then leave, so it’s like a drug deal where someone just got royally screwed,” Creech told Kang.

Creech said it may take banks five or six years to officially deal with the currency that’s growing in popularity, but its something that “we could see”. Meanwhile, Thalmic Lab’s Bejamin Roberts told Kang that it’s “absolutely incredible how quickly it’s catching on.”

Kang told us that “there’s definitely a lot of pros and cons to using it, it’s caught on a pretty massive following and there’s a lot of excitement swirling around it, so I don’t think this is the last time you’re going to hear about it.”

Photo of Creech by CBC KW

Three main points arose during the Smart Contracts and Financial Services panel at the 2017 Canada Fintech Forum in Montreal: smart contracts are only…