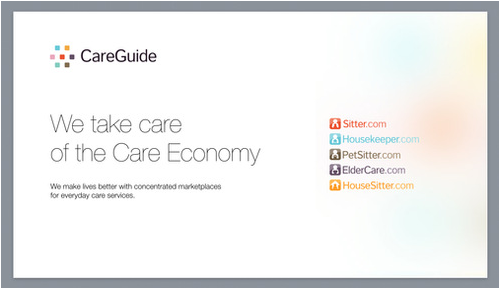 Toronto-based CareGuide has closed its seed round and attracted venture backing from 35 prominent investors in Canada and the US.

CareGuide manages a portfolio of five websites, including Sitter.com, ElderCare.com, PetSitter.com, Housekeeper.com, and HouseSitter.com, matching people with these services in cities across Canada and the US. For a bootstrapped startup that just entered its second year, and managed to hack that hockey stick growth with only two employees, closing a successful seed round spells validation.

John Philip Green partnered with Jesse Rasch and launched CareGuide with all five marketplaces at the same time, about a year and a half ago. “The nature of building for local marketplaces is that it’s hard to get started, because you have a chicken and an egg problem. It’s hard to get demand if you don’t have supply, and vice versa. It took some ingenuity to grow our initial user-base, but once we got to listings in the thousands, it took a life on its own. We now have 150,000 listings across all our sites,” John Green, the founder and chief executive dad at CareGuide, told BetaKit. “When we launched our sites, we addressed all of Canada and the US from day one. We’ve built for scale. And we have done it profitably.”

When a startup turns into a profitable business, founders often face a choice. Continue bootstrapping and grow by reinvesting profits or raise money, often as a step to prepare for round A in the pursuit of rapid growth.

CareGuide chose to knock on doors of other entrepreneurs and bring them on board as investors.

“Today we have 35 committed investors, which is extraordinary! We got there by focusing on other entrepreneurs to get this going, people that raised money before, people who truly get it because they’ve been through it themselves. They were all able to make decisions quickly,” Green said. “The response we have seen from investors really exceeded our expectations.”

What do investors want?

BetaKit reached out to three investors who put their money on the line for CareGuide, and asked why they decided to invest.

Ameet Shah looks forward to watching CareGuide grow. “This space was ripe for disruption with an inflow of potential customers used to searching, validating and transacting online. As the service economy grows, so will the demand for technology to create a more efficient ecosystem, and CareGuide addresses this from day one. The approach that the team is taking has been proven in other parallel industries, but it’s still relatively new to the caregiving space. Finally, John really impressed me with his ability to execute in both past and present endeavors.”

Benjamin Yoskovitz said Green impressed him as a “top-notch founder, who executes incredibly well” and whose product shows traction. “I dug into the core metrics of the business and was very impressed. John’s “cracked the nut” on how to build out the CareGuide sites, and now he is scaling. It’s a great time to invest because he’s already proven a few key things: demand exists and the markets are big; and he has built the right product to meet the demand, based on the current traction and metrics.”

Daniel Debow can’t wait to see what’s next for CareGuide, and called Green “a great entrepreneur with a proven track record of building products, teams and companies. He’s bootstrapped CareGuide to amazing traction and is showing phenomenal growth on a proven model.”

Normally companies that focus on local marketplaces, like Uber or Yelp start out in one city and grow from there, which makes CareGuide an ambitious outlier. And yet, while business costs stayed flat, its revenues keep rising. CareGuide is relying exclusively on organic traffic, according to Green, and doesn’t pay for traffic at all, not even through Google ads.

CareGuide is currently based in ShinyAds‘ office at that famously startupy corner of Queen and Spadina in Toronto. Within the next couple of months, CareGuide plans to find its first community manager, fill an engineering position and add a designer to the team.

Last Thursday, Techstars AI Montreal hosted the demo day for its second cohort in the Cinéma Imperial, downtown Montreal. All 10 startups were pitching…