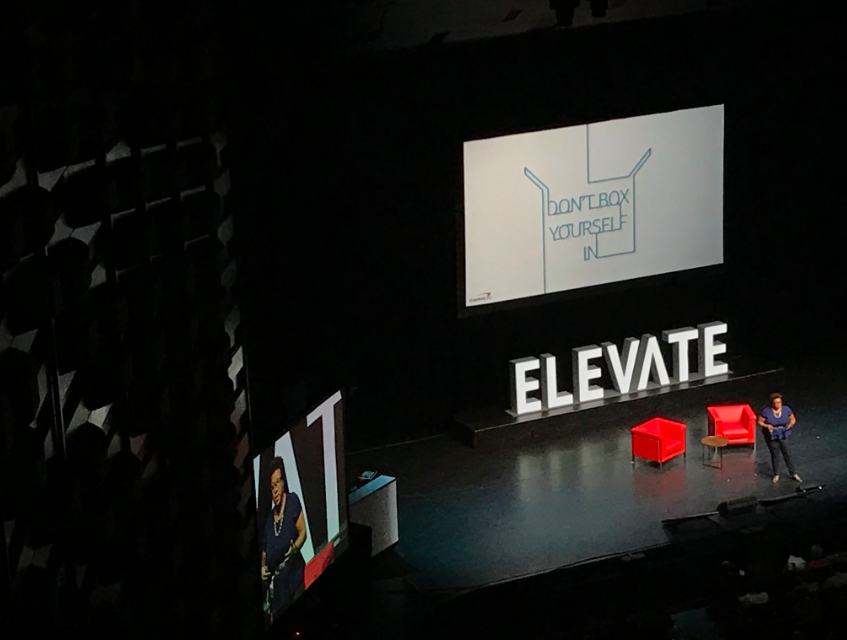 Scaling fast is high-priority for startups, but culture can often fall by the wayside. While creating a supportive environment for employees was once considered a side-project, the public failings of high-profile tech companies in recent years have demonstrated the need to be thoughtful in building the right leadership.

As products are built and conflicts arise, Jackson said it’s important to be able to understand the other person’s point of view.

At Elevate’s Main Stage, Capital One Canada president Jennifer Jackson shared three pillars for scaling leadership in a sustainable way. First, she advised entrepreneurs to not “box themselves in” and be willing to take risks, even if they’re scary. To illustrate this, Jackson shared her own non-traditional journey of getting to Capital One; hailing from the US, Jackson received a Ph.D. in Chemical Engineering, then worked as a consultant in the consumer goods space.

“When I got the call about joining Capital One—completely new territory. Financial services were new to me. Lending and credit cards were new to me,” said Jackson. “But I trusted in some of the foundation I built over time, all the way back from engineering and consulting through the other work. I was confident that I could learn what I needed to because I have a lust for learning.”

Jackson’s second pillar addressed the need to build diverse and inclusive teams. Founders sometimes get caught in the trap of hiring friends and people similar to them, unwittingly building a company culture lacking in distinct voices. Speaking with BetaKit after her talk, Jackson said that to avoid biases Capital One has implemented blind screening processes, included people outside of the hiring department in the hiring process, and built a culture where people feel like they belong.

??Modern leadership advice from @CapitalOne President Jennifer Jackson – don’t box yourself in. Take risks and harness the ability to adapt and be flexible. Empathy, emotional intelligence, and be inclusive in your hiring and team environments. #ElevateTechFest pic.twitter.com/xNARrY7q6H

The need for inclusiveness extends to product development. Jackson told BetaKit that, from the beginning, Capital One focuses on bringing different disciplines together—developers, designers, communicators, and others—to be part of the decision making process. This ensures that mistakes can be avoided as a product moves up the chain, but it also has the effect of giving people a sense of ownership.

“Sometimes this takes some work and rejigging in figuring out how to set up your organization structure, but the power we’ve seen when we’ve done this, again that next level team problem-solving has been amazing,” said Jackson. “Ultimately all those people need to come together, but the old way of working would’ve just been you do everything consecutively, and if there’s a hiccup over there you start all over with different pieces. Now that all happens together, you don’t have that extra time of iterating not to improve, but iterating because you have to start a few steps back, and that’s where we don’t want to spend our energy.”

Jackson’s third pillar includes prioritizing emotional intelligence. As products are built and conflicts arise, Jackson said it’s important to be able to understand the other person’s point of view. To build empathy and create a space where people feel like their ideas are valued, Jackson encouraged leaders to carve out work time specifically to make connections.

“[I recommend] setting team goals that are aligned as equally around getting to know each other as is delivering a new product to market,” said Jackson. “That time is well-spent because it does two things: it helps you form the connections that aren’t necessarily obvious, and it helps the second piece of empathy that’s so important, which is allowing people—especially in moments of conflict—to put themselves in other people’s shoes.”

BetaKit is an Elevate Digital Transformation media partner – this article is sponsored by Capital One.

Squiggle Park, a web-based platform that aims to help children learn how to read, announced that it has raised an $800,000 seed round. To…