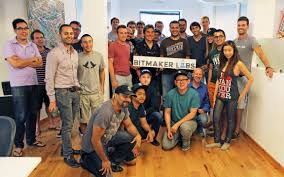 There’s a high-priced coding school battle going on in Canada and the three companies pitted against each other, Bitmaker Labs, BrainStation and Lighthouse Labs, have all made significant moves.

It all more or less began with Bitmaker Labs and its five cofounders about two years ago. Along the way a breakup happened, with Duncan McCall branching off to start Toronto’s Brainstation. Meanwhile Will Richman and Andrew Mawer took over the full reigns of Bitmaker Labs.

Think of it: you have a skill that helps you earn a lot of money. Other people don’t. Charge them all $8,000 for a three-month course and nearly guarantee them a job. It’s an instant money-maker.

And when those people get jobs, the business is then facilitating that wonderful thing we all love: the economy gets a little stronger.

Coding schools typically begin with their bread-and-butter web development “bootcamp,” expanding out to mobile and other areas from there. Lighthouse Labs was the most recent to make headlines, when it announced a new “iOS bootcamp”, priced at $8,000. Brainstation seems to aim its focus on mobile, and recently took up residence at Toronto’s Extreme Startups accelerator for its 12-week course.

Now it’s Bitmaker Labs’ turn to make a move. The Toronto-based school has launched its new Design Bootcamp, “Canada’s First” (they’re all Canada’s first because the industry is barely two years old here). To do it, Bitmaker Labs has taken a step forward, partnering with a Toronto-based design and user experience (“UX”) “collective” called Tailored UX, lead by Mustefa Jo’Shen.

Richman employs several instructors within Bitmaker Labs who teach the other courses, so seeking and entrusting the services of an outside firm is reason to take the move seriously. It’ll cost students $7,500, it runs 12 weeks in length and kicks off on June 12.

Tailored UX will design and teach the curriculum (the syllabus can be found here) and it will be made up of workshops and lectures. “It’s all industry related and we’re taking everything we do today with startups and translating it into tangible workshop-style curriculum to really graduate people at the end of 12 weeks to get a job as a junior designer or developer.”

Jo’Shen said the two companies really want to “change up the game” in terms of how the instruction is executed so it’s career and job-focused. Bitmaker Labs has been running the longest out of the three coding schools, so it should know by now what works and what doesn’t.

Richman said the course came about after Bitmaker Labs had been supplying its hiring partners with back-end developers, before those partners came back. They said they wanted people who could make decisions based on front-end development experience, along with an understanding of the fundamentals of design. “It was a pretty obvious thing to put out there given what our hiring partners were asking for.”

For Jo’Shen, he said he’s living proof the need for more people who can design software. As a guy who need to hire people on a regular basis, he said he’s brought in several people “who just don’t cut it.”

“I want to train people that I myself would hire at the end of it. Startup founders are craving these people, UX unicorns or whatever the heck they call it in the industry now,” Jo’Shen told BetaKit. “These people are real and we could translate that skill set.”

For Richman, he said his school’s employment-after-graduation rate is at 90 percent, and he wants that remaining 10 percent. Bitmaker Labs has now graduated 220 coders and it wants more. “I want us to be the hub or the focal point of the tech community in Toronto. I’d like to see a lot more meetups and a lot more part time courses where anything you need to learn for a startup you can find at bitmaker.”

Not only does the new course reflect an emerging trend in the startup industry (people want people to work for them who can design stuff), but Jo’Shen said the graduates coming out of Bitmaker Labs are actually coming into startups and making real contributions.

“They did the work, they finished the work and it was no BS,” he said. “They’re worth their weight in gold.”

CanCon Podcast Ep. 89: Is Canada ready for the Singularity?

The singularity is coming! Is Canada ready? According to the SingularityU Canada Summit last week, the world has at least a dozen accelerating technologies…