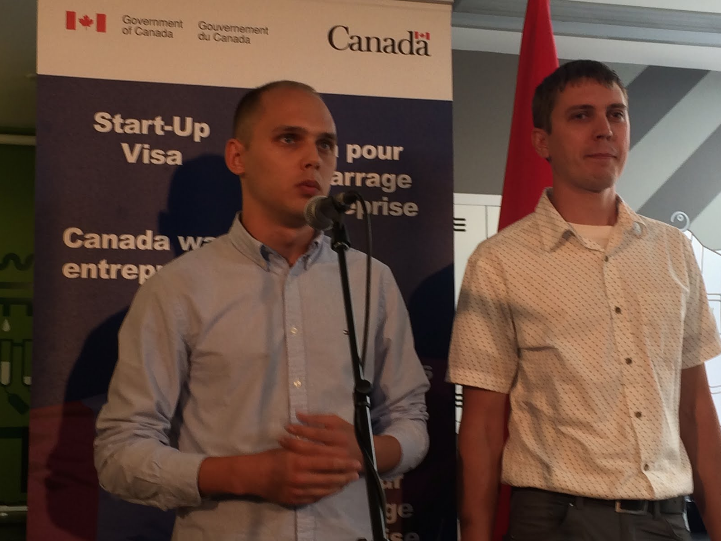 Minister of Citizenship and Immigration Chris Alexander was in Vancouver Thursday morning at GrowLab and Launch Academy to announce Zeetl cofounders Stanislav Korsei and Alexander Zadorozhniy as the first recipients of the Canadian Startup Visa Program.

Last September Minister Alexander formally introduced the Startup Visa program to little media attention. GrowLab executive director Jonathan Bixby said “from the pressure of getting a Startup Visa in Canada to the program’s announcement it’s been a long journey. We’ve finally gotten to this point where the government is doing it, and now embracing it, and I’m elated we have our first successful company through the program.”

For Korsei and Zadorozhniy, having the opportunity to take part in the Startup Visa program was a deciding factor in leaving the Ukraine and working towards building their business in Canada. Equally as important they both talked about being happy about raising their families here.

Minister Alexander pointed out “as part of our government’s focus on job creation, economic growth and long-term prosperity, it is critical for Canada to attract the best entrepreneurs and innovators from around the world. Our government is proud to welcome the first successful applicants of the Start-up Visa Program and we look forward to the success of their venture and other opportunities that will help create more jobs for Canadians.”

“We have to open our minds to the fact that some of the best entrepreneurs in the world can be found outside of Canada.” Bixby’s premise is very simple: “these entrepreneurs will make great citizens.”

Through Growlab, he’s worked closely for the past six months with Korsei and Zadorozhniy. Bixby isn’t shy about holding them up as great examples of why this program will have a meaningful impact. It’s good for people, good for our communities, and good for future high value employment opportunities. “It will be good having them part of the Canadian fabric,” he added.

With two other GrowLab companies Rets.ly (co-founder Joshua Lopour and Cognilab (founder Jose Barrios) currently working their way through the process, Bixby wants to do even more. He feels the program, “is being underutilized, and we intend to utilize it a lot more moving forward. I think the program will be built to scale.”

There’s no question that job creation is a key to the Startup Visa program. But giving our entrepreneurial and technology ecosystem a more dynamic worldview, and lens on other markets will be a huge advantage as well. Alexander also noted, that technology is moving too fast, and it’s not the government’s job to be trying pick the winners. As Bixby pointed out, “the developing worlds markets are growing very quickly. As an investor and working with startups who bring this experience and perspective into the equation, that’s really exciting for me.”

Considering the government has been historically known for moving at glacial speeds, seeing the time it’s taken to make this announcement is somewhat encouraging. Ideally, these announcements will soon be coming at the volume and speed where no fanfare will be required.