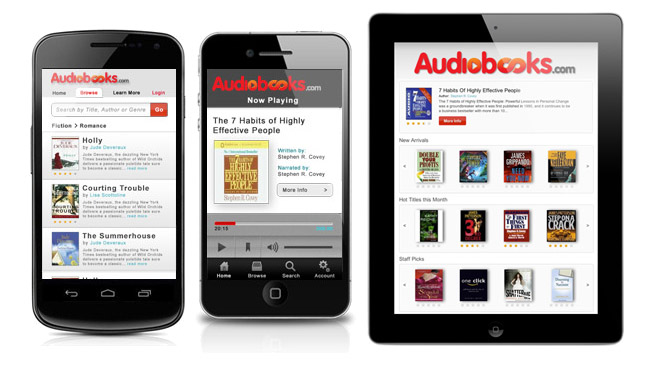 Over 40 percent of people say they’ve listened to an audiobook, and as city commutes become the norm for more and more young people, that number is only set to grow.

In fact, a recent Consumer Reports article noted that in-car electronics (like media centres) is the” fastest-growing area” of auto technology.

But for frequent users of audiobooks, constantly downloading new titles could be a memory-drainer on whatever device they use. To solve that problem, Burlington-based Audiobooks.com today announced it is the first startup in its space to allow streaming of audiobook titles, freeing up users from downloading (and storing) large amounts of content.

“Audiobooks.com is leading the streaming revolution in the audiobooks space,” said CEO Sanjay Singhal. “While other services require users to download and store content, we give members a choice of on-demand streaming or downloading for times when they can’t access broadband for streaming.”

Audiobooks is making the comparison between how digital downloads once replaced physical media like CDs, and how streaming is replacing digital downloading as the media consumption technology of choice. As the success of streaming platforms like Netflix and Pandora have demonstrated, Audiobooks.com doesn’t require the user to save content, but rather provides is from a cloud-based service.

The startup has also announced the release of updated versions of the company’s free iOS and Android apps. Featuring an “intuitive new user interface,” the newly released apps are available at Apple’s App Store for iPhones, iPod Touch and iPads or at Google Play for Android devices. Members can use the apps to stream content on demand, choosing from tens of thousands of audio book titles like The Hunger Games trilogy and the Twilight series as well as popular best-sellers such as Ender’s Game by Orson Scott Card, and more.

Audiobooks.com was founded because Singhal and his team believe that reading books makes a person happier, helps them learn and makes them grow.

“A wise man, Stephen King, once said ‘books are a uniquely portable magic.’ We couldn’t agree more,” reads their site.

To put it simply, they’re a bunch of book and tech nerds doing cool things to make listening to books better. As well, the startups claims be the first on-demand streaming and downloadable service for audiobooks, delivering access on any Internet-enabled smartphone or PC. The company also says it’s the first and only provider of Cloud Bookmarking, its proprietary technology that synchronizes users’ last listened-to bookmark position across all devices.

“Streaming technology is changing the way people access content across the media spectrum,” said Singhal. “Broadband access is on a steep upward trajectory, and new technologies are supporting expanded access to streaming platforms everywhere. Audiobooks.com is the only player in the industry that is delivering audiobooks in the on-demand streaming format consumers increasingly prefer.”