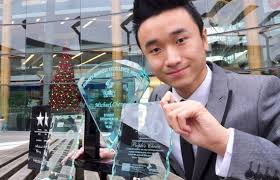 I’ll admit it in all its biased glory: I’m a big fan of Michael Cheng.

In his still young career he’s won too many different awards and recognitions to count. They include being named one of MacLean’s future leaders of Canada, winning the Reza Satchu prize while at the Next 36 program and being named in various “Top 25 under 25″s in Canada. He was a teaching assistant at Simon Fraser Univerisity in just his second year of his undergraduate degree.

Maybe I like him because his folks arrived in Canada from a foreign country with little to their name, just like my grandparents. His dad still works in a grocery store while his mom works as a receptionist, and Cheng has taken little for granted.

Our conversation today largely revolved around an interesting user comment on a feature I wrote about his last venture, a website that curates cover music videos called Covr.fm. Covr attracts anywhere between 250,000 and 500,000 monthly uniques, but Cheng admitted that “it’s very difficult to find funding and monetize for a music startup,” so he and his small team moved on. The site still generates affiliate sales from iTunes sales, but nothing huge.

The article in question played up Cheng’s “go big or go home” attitude when it came to business. The comment was this:

It was a fair comment, but I’ve always thought that someone could come up with 100 ventures, and as long as just one ends up helping users in some way, providing jobs or contributing to the economy, then I’ll call the person a “success”. Why hate?

“The whole idea of going big or going home inherently encompasses failed enterprises. I’m not going to continue ten years on a project that I don’t think will go all the way,” said Cheng. “I can see where he’s coming from and I’m sure a lot of people think that way as well. I’m not trying to position myself as a Jack Dorsey, and none of my companies have gone to a IPO, I’ve had no big acquisitions and I’m not in the Valley. But the overarching narrative of my career is constantly trying and getting back up.”

And while all of that is true, let’s not forget that he’s done quite well for himself. His most successful business to date is WittyCookie, a Vancouver-based web design company that offers affordable design services & SEO services starting at $20/month. For a few years now the company has consecutively pulled in revenue in the six-figure area, while building 2328 websites for 1387 clients around the world. WittyCookie was one of the first companies to offer web design with SaaS pricing.

Hopefully that’s successful enough for some of Cheng’s detractors, and more on where some of those profits are going towards later.

His other interesting comment was how even his failed startups like NeedleHR, a startup born out of the Next 36 program that ultimately ceded to aggressive competition, are all in some way related to each other.

NeedleHR was a marketplace for creatives which closed it doors in November, after US competitors Elance and oDesk merged. Even just a few weeks ago, Montreal-based Crew launched with $2.1 million in venture funding under its belt.

“We said the design space wasn’t working and we asked ourselves ‘how are we going to help people find creative talent in another field?’, and that’s how we arrived in music,” Cheng told BetaKit. “Everything that I’ve worked on ties together, and Covr’s client discovery led us to the fact that there’s a need for content marketing.”

If that’s confusing, let’s back up a bit. While working on Covr, Cheng had investors asking him how the service could be more business-applicable. One beta user approached him about creating a channel for himself, but not for cover music. He wanted to show startup pitch videos. It would be the client’s own branded channel where he could constantly show other startup’s pitches, thus piggy-backing on their content.

“We said ok, so what you’re looking for is content marketing with other people’s content, which makes sense, but we don’t need all this video. Let’s tune out all the noise and dig down deeply into what you really want, and that’s how we came up with Snip.ly.”

Snip.ly is an extension that allows people to share articles like this one, while attaching a little snippit of their website, driving conversion through other people’s content. It’s both selfless and selfish at the same time (but then again, that’s basically how most people behave on social media today anyways).

Industry stats from ad conversions usually fall under one percent, but with Snip.ly, Cheng has been seeing a conversion rate of three to eight percent. They recently launched the pro and business versions at $15 and $100 each, with a few paying customers in each category already. The paid versions allow more customization of the snippits.

“The best types of Snip.lys we’ve seen are not people mindlessly putting in blatant advertising, but people who are putting in context. Lets say the article addresses a certain issue, they can say our company addresses this issue, click here to see what we can do for you,” said Cheng. “It’s incentivized sharing and there’s a value aligned in it.”

Once again, Cheng is innovating. He didn’t see too much happening in the way of Covr (even though lots of people around the world really like it) so he didn’t think twice before moving on. If that doesn’t personify the “startup spirit” as we all love to promote so much, I don’t know what does.

And the best part about all this? Cheng and his team at WittyCookie are currently taking “a substantial chunk” of the profits they made over the past few years and opening up a coworking space in Surrey. He says he believes in the growing startup community of entrepreneurs in the Vancouver neighbourhood, and he wants to see it grow even more.