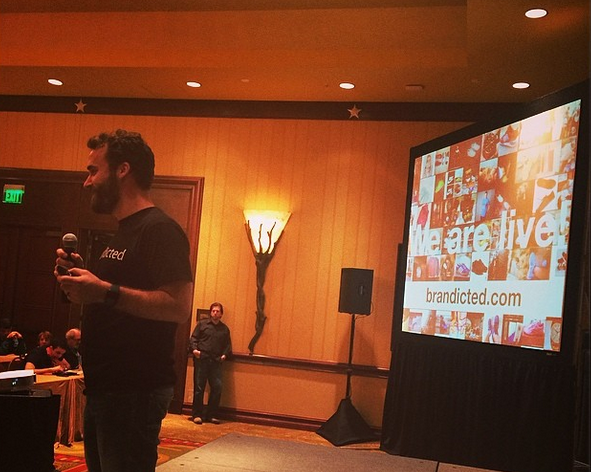 Jonathan Stoikovitch knew that SXSW 2014 Interactive Festival would be crowded with small startups clamouring for attention, but he figured it was worth the trip.

The Montreal-based CEO runs Brandicted, an online platform that allows people to explore and buy products right away when they see them on social media networks. “People shop from visual cues,” simply enough, is the company’s motto.

Stoikovitch and his community manager Nicole Fu were in Austin, Texas this week for the giant annual tech fest, and for good reason: they launched their open beta at ReleaseIt, an event for only seven startups.

It’s a tough decision for Canadian startups to make the trip down to Austin, let alone launching at SXSW. I always liked one particular article by Mark Suster, warning startups not to launch at the massive gathering of humans. “There will be tens of thousands of people there. They will be there mostly to network, go to parties, and hang out. They are not there to ‘discover the next cool SXSW app.’ You are a shitty little startup. You have $10,000 to spend. Actually, you don’t. But you’re planning to do so anyways,” wrote Suster.

Whether they were on the SXSW high or not, we ended up speaking to several Canadian startups like Plantiga and Brandicted, who felt the trip was completely worth the investment. I get Suster’s words, and they carry weight. But it seemed like these Canadian startups came with a budget in mind, knew they could afford the short trip and came prepared with concrete objectives to tick off.

For Stoikovitch he said the company was merely executing a mini-launch out of beta, and they figured they’d take the opportunity. “It’s been great so far: we’ve got some buzz and of course you’re diluted with the thousands of other brands and startups trying to leverage buzz, but it was good,” he told BetaKit. “You’re one fish in a big pond but there’s enough water for everyone.”

For Stoikovitch the serendipitous nature of random, chance encounters made the trip worth it. He said initially it was a concern, and it was hard to evaluate based on reviews from peers. Ultimately though “it was the best event I’ve ever been to.” He said it’s a small risk, but certainly not the biggest risk you’ll ever take.

Stoikovitch ended up meeting some friends in a different kind of space when he briefly spoke with some promotional help for the upcoming HBO series, Silicon Valley. The Montreal entrepreneur will actually be appearing in one or possibly both of the final two episodes of this first season, as an extra.

Silicon Valley held a large presence at SXSW Interactive this year, screening its world premier for the first two episodes. Created by Mike Judge, the show follows a group of  housemates working on a startup company in San Francisco.

On another note, the Brandicted team ran into “Success Kid”, the wildly popular Internet meme. This is SXSW for you, people.