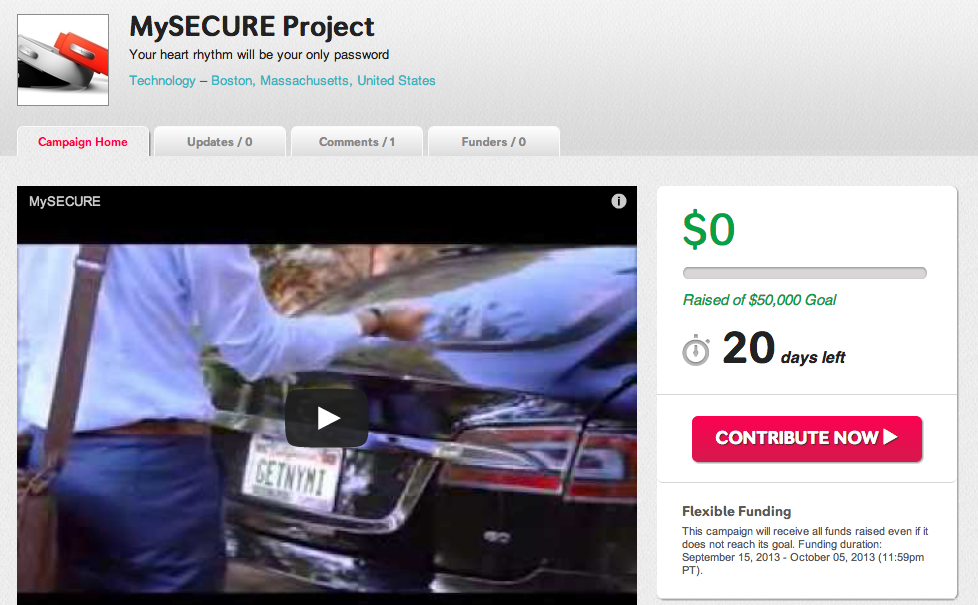 Crowdfunding backers beware. I woke up this morning to find a Facebook post in my feed from Toronto-based Bionym, the creators of the heart authentication bracelet Nymi, alerting people to a fake Indiegogo campaign. The campaign is reportedly impersonating their device to raise funds on the crowdfunding platform under the name mySECURE.

The mySECURE project launched yesterday from Boston, USA and is claiming to have created a bracelet that authenticates you using your heart rhythm. The images and campaign video have been lifted directly from Bionym’s website. In fact, the video clearly shows the brand name “Nymi” numerous times throughout the marketing spot.

According to the mySECURE Indiegogo page, the team is looking to raise $50,000 for their mySECURE wearable device with only one reward available to backers – $150 which will get you a mySECURE delivered straight to your door.

BetaKit reached out to Bionym to confirm that this campaign is a fake. We received this comment from CEO and co-founder Karl Martin: “This is completely fraudulent and has no affiliation with us. While it doesn’t surprise us that someone would try to cash in on all the attention we’ve received recently, it is shocking that Indiegogo would let it through without any due diligence. We’ve requested it be taken down, but it’s still up there, more than 2 hours later.” (UPDATE: Indiegogo took down the page around 1PM EST).

Indiegogo does have a fraud-detection policy in place which states that “All campaigns and contributions go through a fraud review, which allows us to catch any and all cases of fraud.“ That being said this policy also clarifies that the responsibility in deciding to support a campaign is all on the backer. “We leave it up to you to make your own judgment about the merit of a campaign before making a contribution”.

This is not the first time that a fake campaign has snuck through the system on Indiegogo. Back in July of this year, The Burclader 3D Printer campaign was trying to raise $100,000. The 3D printer was a direct copy of The Bucaneer 3D printer from Pirate3D. Ironically this scam also involved Canada as the creator of the fake campaign was said to have been from here. Indiegogo did take this campaign down after it was reported.

There have been other campaigns that have also been identified as fake on Indiegogo and on Kickstarter sparking many conversations around scams on crowdfunding platforms. PandoDaily wrote a great piece on this subject in June of this year called “Thieves and Scams: The Problem with Crowdfunding”.

The mySECURE campaign page has since been taken down after being up for more than 24-hours. Prior to it being removed, BetaKit saw no backers or funds raised.

The COVID-19 pandemic is challenging sectors that have, until now, experienced relatively low levels of technological transformation. One sector that is no exception to…