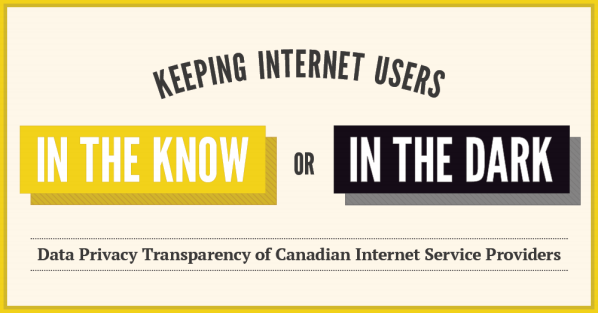 The legendary American hip-hop artist “ODB” once waxed, “I’m the O-D-B as you can see/ Every eye, don’t you be watching me.”

Evidently Canadian Internet Service Providers (ISPs) never listened to those wise words. Canadian consumers are giving Internet carriers their “numbers”, but they’re not getting “called up”.

In fact, a new report from the faculty of information at the University of Toronto indicates that the amount of transparency on behalf of Canadian Internet Service Providers (ISP) is near deplorable.

20 Canadian ISP’s were ranked up to ten stars based on their data privacy transparency. The study, called “Keeping Internet Users in the Know or in the Dark?“, was completed by Andrew Clement & Jonathan Obar.

It was completed in the wake of the Snowden revelations about NSA surveillance, amid recent calls for greater data privacy that recommended that ISPs be more forthcoming about their handling of our personal information. Responding to this concern as well as in keeping with the transparency, openness and accountability principles fundamental to Canadian privacy law, the report evaluated the evidence.

Stars were awarded based on how an ISP could answer these ten questions, based on publicly available information:

“Slightly more than half of the ISPs (11 of 20), all operating primarily in Canada, state a commitment to adhere to the Personal Information Protection and Electronic Documents Act (PIPEDA), which governs the handling of personal information in commercial transactions. None of the foreign-based ISPs that carry significant amounts of intra-Canadian traffic indicate any explicit compliance with Canadian privacy law. Foreign carriers expose personal data to US and other jurisdictions, where Canadian data is largely unprotected legally from foreign state surveillance. This is especially concerning because while Canadians can work to influence the activities of a democratically governed Canadian state surveillance apparatus, Canadians’ ability to affect the activities of foreign governments is relatively limited.”

No Canadian ISP has yet to publish a transparency report along the lines of AT&T, Verizon, Google, Facebook or Twitter, each of which have begun to report standardized statistics concerning law enforcement access requests.

As a result of the study, Clement and Obar issued these 14 policy recommendations for Canadian ISPs:

Recommendation 2: A public commitment to inform users when personal data has been
requested by a third party,

Recommendation 4: Detailed conditions and procedures for law enforcement and other third parties that submit requests for personal information,

Recommendation 5: A clear indication that metadata and device identifiers are included in the definition of ‘personal information’.

Recommendation 6: Retention periods and the justification for these, for the various types of personal information handled,

Recommendation 7: Details of whether personal data may be stored or routed outside Canada,

Recommendation 8: How they strive to keep Canadians’ data within Canadian legal jurisdiction,

Recommendation 10: The extent to which they advocate for their subscribers’ privacy rights.

For Privacy Commissioners and the Canadian Radio-Television and Telecommunications Commission (CRTC):

For legislators and politicians:

Recommendation 14: Canadian law enforcement and security agencies should proactively
publish statistics about requests for personal information they make to ISPs.

Finhaven has raised a $6.6 million CAD Series A round. The funding was led by Dunamu & Partners, with participation from Lanebury Growth Capital…