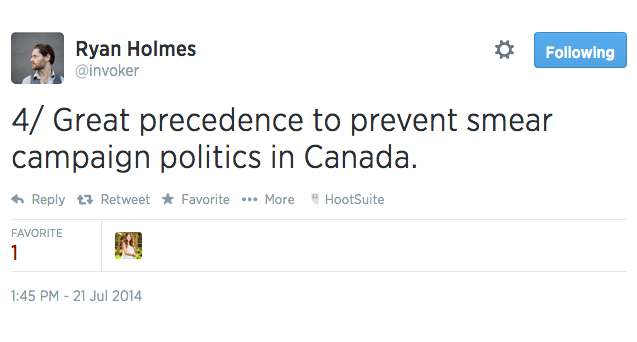 A B.C. Supreme Court judge has dismissed a conflict of interest petition against Vancouver startup Hootsuite and Vancouver mayor Gregor Robertson put forth by political rivals.

Cedar Party mayoral hopeful Glen Chernen and nine others filed a petition alleging that the mayor acted in conflict of interest when he voted to grant Hootsuite a lease to a city-owned building. However, Chief Justice Christopher Hinkson wrote in his judgment that the petition wasted the court’s time.

It was an ” abuse of the Court’s process on the basis that it is without foundation and can serve no useful purpose,” wrote Hinkson. “In my opinion, there is no evidence that the modest campaign assistance provided to the respondent by Hootsuite during the 2011 Vancouver civic election was linked to the lease and option to purchase the property.”

Hootsuite CEO Ryan Holmes took to twitter following the announcement, calling the ruling a “Great precedence to prevent smear campaign politics in Canada.” He also jokingly said he would send Hinkson a “Hootkit,” which includes “a sticker and sometimes a t-shirt & was named as a reason for conflict of interest.”

3/ For the record, I am not actually sending CJ Christopher Hinkson one… Although, I am sure that he would love one.

“While it is clear that the respondent has had interactions with Hootsuite during his present term of office, there is no evidence to suggest that he has any direct or indirect financial interest in that company, and no other interest in the lease of the property that would constitute a conflict of interest,” continued the judge.

While Hinkson said the petition lacked legal merit, he did admit that the dealings between Hootsuite and the mayor “was somewhat shrouded in secrecy until a point after which the petition was filed.”

Chernon and his peers said that they would consider appealing, and that the petition highlighted the lack of transparency within Vancouver city council.

“Although we are disappointed in the judgment and Chief Justice Hinkson’s narrow application of conflict of interest law to the facts of this case, we take note that the Chief Justice did not find the case vexatious nor frivolous,” he wrote.

Scotiabank has announced the launch of Scotiabank eHOME, a digital platform that allows Canadians to undergo the mortgage process online. The platform will aid…