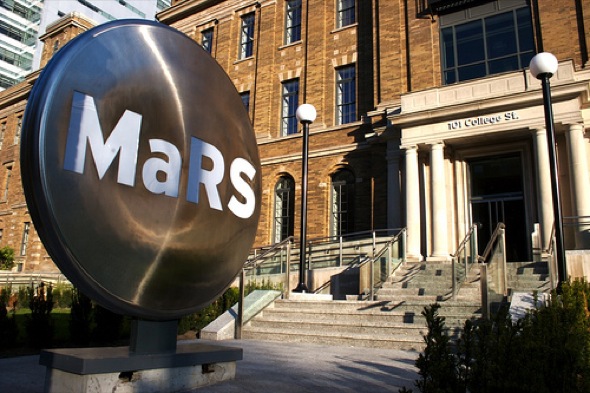 Last week the MaRS Discovery District hosted an event to celebrate its $15 million funding extension, first announced back in February. The federally funded Network of Centres of Excellence (NCE) was responsible for the funding extension.

Tapscott, one of the world’s leading authorities on innovation, media, and the economic and social impact of technology, spoke about “Innovation and Entrepreneurship in the Age of Networked Intelligence.” He’s long been a proponent of mass collaboration and its effects on change and entrepreneurship. Many will be familiar with his 2007 book Wikinomics: How Mass Collaboration Changes Everything.

Before he urged different sectors to adopt collaborative approaches, Tapscott touched upon the history and rise of entrepreneurship (and its virtues).

He explained that entrepreneurship changed a traditional, industrialized model where goods and services were largely given to a passive consumer base. Over time though, people engaged in entrepreneurial activities to create a demand-pull from the “new business environment.”

Entrepreneurship, Tapscott argued, is the way of the future. “In 2007, the last year that data was available, eight million out of the 12 million new jobs were created by start-ups less than five years old,” he told the crowd.

“The Internet creates a corresponding technology push as it drops transaction and collaboration costs, enabling new innovative networked models of the enterprise. As more small firms exploit the Web for new resources, they can gain unprecedented access to global markets previously enjoyed by only the largest corporations. And as small companies expand, they create new jobs at a faster rate than their larger competitors.”

But going forward, said Tapscott, the ‘crowd’ must be leveraged to solve “old problems.” He told the story about Toronto-based Goldcorp Inc. changed the way the gold businesses finds new mines, by running an open-source challenge. The initiative was wildly successful, reinvigorating the company.

The speaker chastised the healthcare and pharmaceutical industries who could most benefit from instigating such changes. “The industrial age model for healthcare says, ‘I’m a clinician, I have knowledge,'” he said. “‘You’re a patient and you don’t. I deliver healthcare to you and only when you come into the system, which is why it’s so expensive.” But no current government can continue to afford to keep paying more and more in healthcare costs.

His solution? “A system in which everyone involved, including patients, use the Web as a platform to share information, deliver care and build communities around medical interests and health goals.”

“Not only is collaborative health care focused on the patient; the patient co-creates health care and wellness, producing an outcome that is a more evidence-based and cost-effective, i.e., safer, better and cheaper,” said Tapscott. “Adults would own and control their own data, but health care professionals (and perhaps family members) could access it as required with appropriate levels of privacy and security.”

For this shift to happen though, science needs to be transformed into the age of collaboration. “Why can’t clinical trials be run openly and publicly?” he asked. “How can we use social tools to shift behavior that produces health concerns, such as obesity, now that it’s clear that lecturing people doesn’t change behavior?”

Tapscott’s “Wikinomics: How Mass Collaboration Changes Everything” was the best selling management book and translated into over 25 languages. Tapscott is also an adjunct professor at the University of Toronto’s Rotman School of Management.