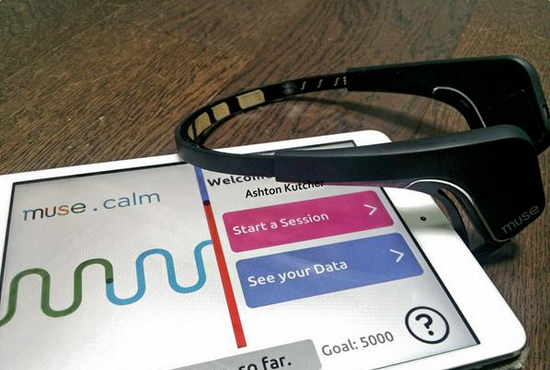 Yesterday Ashton Kutcher sent out a tweet to his 16.3 million followers about the Muse “brain-sensing” headband, and how he excited he was to “ learn from this incredible technology.”

Given that Muse and its creators, Interaxon, are Canadian entities, we thought it was pretty cool and we quickly reported on the nice dose of PR that Toronto’s Interaxon was receiving.

That’s when BetaKit reporter Tom Emrich found something fishy, particularly when he compared a snap he took for a piece early last month that revealed that Interaxon had launched online orders, with the photo in Kutcher’s tweet. How similar they looked, he thought.

The fact that Kutcher is an investor in Interaxon, with his A-Grade Investments vehicle, never occurred to me as I covered his tweet yesterday. And frankly, it doesn’t really matter. What is odd though, is why he wouldn’t just use a stock image of the technology. Why photoshop one of Emrich’s photos, scrawling in his name and altering the score?

We weren’t the only ones to find it bizarre.

Valleywag jumped on it yesterday, asking the same questions. “Our esteemed art director Jim Cooke could not say with 100 percent certainty that the image was doctored, but he did point out that by brightening the exposure, one can clearly see the letters “going over the headphones, or whatever those are,” wrote Valleywag’s Nitasha Tiku.

But the “Twitter tomfoolery” doesn’t end there for the Hollywood actor. Even more interesting may be how the Daily Mail yesterday reported that a wildlife photographer is accusing Kutcher of stealing his photo of a “monkey on Facebook”. Apparently Kutcher tweeted out the photo as if he was the one who took it. Not so, said Marsel van Oosten from Holland, who snapped the picture of the Japanese macaque

Meanwhile, Valleywag took exception with how Kutcher couldn’t just disclose that he’s given Interaxon money. Apparently it wasn’t the first time either, as he once name dropped a few portfolio companies on Two and a Half Men, once trying the same thing with Interaxon.

“The company has raised about $7.5 million to date, [CEO Ariel Garten says]. It closed a $6 million round last year, on an offered $5 million. One of its investors is the actor Ashton Kutcher, who worked references to a company resembling Interaxon into an episode of the CBS sitcom Two and a Half Men,” wrote Fortune.

We say a job well done to Tiku for having her ears perked on the subject. Other than that, all we can say is that the world of tech gets a little bizarre every now and again.

Dissecting The QR Code: Should Your Brand Use Them?

The year was 1994. President Clinton delivered his first state of the union address and Ace of Base was at the top of the…