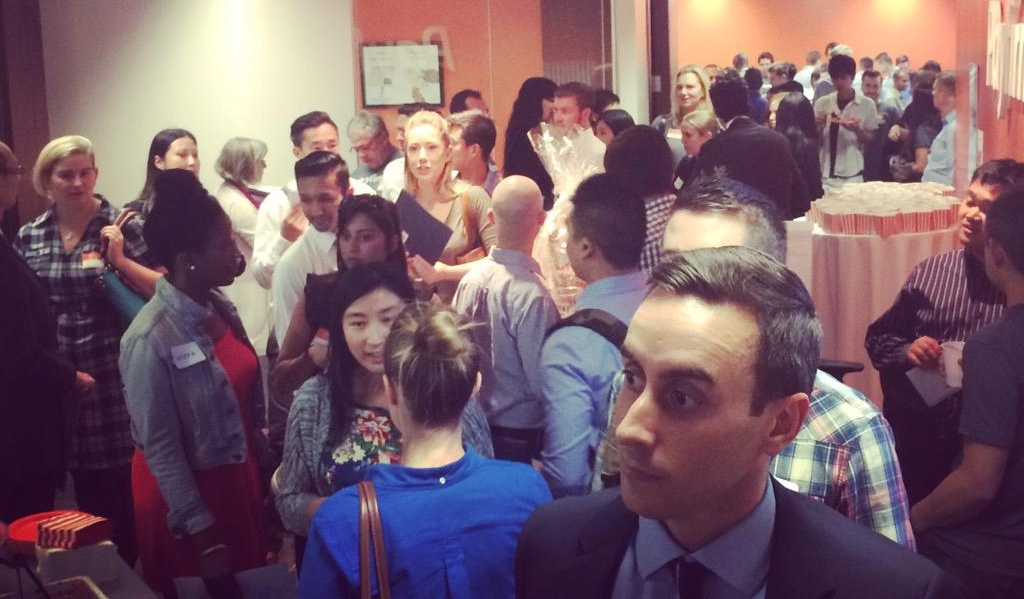 We did it. Some of Vancouver’s most enthusiastic entrepreneurs and angel investors envisioned this outpost on Canada’s Pacific Rim growing into a world-class tech hub – and that’s happened. We’re Silicon Valley North. The opportunities are only going to get bigger and brighter – but for companies looking to hire a stellar team, the challenges just got bigger, too.

Coming off a $13 million funding round, Payfirma is in a perfect position to start hiring and growing on a much bigger scale. To that end, its hiring fair this week put out all the quirky stops, with ping pong, beer-tasting booth, doughnut stall and other attractions to highlight their fun-loving corporate culture.

What are they looking for in employees to fill all the new roles in development, marketing, operations, sales and support? “People who are passionate about what they do,” said Payfirma HR Manager Suzanne Chung. “We’re also interested in developing leadership among our employees. Many of our employees are a bit younger – but they’re interested in learning.”

That hint of a gap may be the thin edge of a much more critical wedge when it comes to the local job market. Colin Mansell, whose RED Academy just launched this month to teach the ‘designers, creators, developers and digital marketers of tomorrow’, was started because Mansell saw that gap impacting his own business. “It’s getting really difficult to hire, especially at the junior level,” he said. “At the intermediate and senior levels, there’s more talent available, and once you’ve got great people at that level, it’s all about having a good cultural fit. But with juniors, there’s a weird thing where we’ve got three and a half thousand jobs open to developers in Vancouver and we’re still seeing underemployment with young people.”

“There are Paulo Alto grads with no experience getting paid six-figure salaries.” Can Vancouver afford to compete with that?

Mansell suggests the problem stems from problems with how technology is taught in the classroom – something he aims to change with his new school, whose courses are designed with direct input from some of the biggest tech companies in Vancouver. But the problem may be subtler than that. Is Vancouver on the cusp of becoming a victim of its own success?

Up until now, Payfirma’s had a good record of success at hiring the people they want, thanks to their corporate culture, says CEO and Co-Founder Michael Gokturk. “Payments is also sexy right now. We’re innovating in a space that’s right for disruption. It’s a fun business, so we haven’t had too much trouble attracting talent.” That said, there could be a crunch coming.

“It’s a small tech community and when your peers are on your board, that limits your pool,” Gokturk said. “You have to do what’s best for your business, but there’s an unspoken agreement to not poach from one another. That’s why we have to bring in talent from other provinces.”

Growing up the tech sector here may lead to temptations to follow Paulo Alto in terms of overall compensation; a short-term fix with the potential for longer-term pain. “When we weren’t able to pay market prices, we compensated with benefits and perks. Now that we can pay market prices, we’re faced with a thin talent pool. There are such great companies here – why would they come work for you? If hires are just driven by income, we’re artificially driving up wages.

“There are Paulo Alto grads with no experience getting paid six-figure salaries,” he added. Can Vancouver afford to compete with that?

Even if BC is doing a good job of pumping out graduates who can work in the local tech sector – and Gokturk’s take is that they need more, not all will stay here when it comes time to find work. “We know that we’re prone to brain drain from Boston, New York and San Francisco. A good quarter of graduates are going abroad and are snapped up quickly – and rightfully so. It’s not that we’ve got a shortage of graduates, but a shortage caused by a brain drain. It’s hard to compete with a Facebook or Google. Amazon is coming here, which is great, but for a little guy like us, it’s hard.”

Predicting the future is notoriously a mug’s game, so perhaps it’s not surprising that recruiting firm TEEMA Solutions, which helps many job candidates in the local tech sector should hedge its bets on what’s ahead. “Is the hiring challenge overstated?” asked Steve Reimer, Vice President, Operations. “It all depends on who you ask. Vancouver is healthy even with the cost of living. One can’t argue quality of life factor when it comes to the mountains, the beauty of its landscape, proximity to the Okanagan, Seattle, etc. But as more and more reputable and notable tech firms move in, like Microsoft, Amazon, Google and others, it can bring with it a wave of interested candidates.”

Instead of being victims of our success, we could see a positive hiring cycle. “If candidates flock here, that’s only a good thing,” Reimer said. “Not all of them will find a job with these big firms, which means other tech firms win. They are not getting the hand-me-down’s, so to speak, as many of these candidates will still be very talented people.”

Telehealth startup Dialogue is launching the second phase of its Stress Management and Well-Being program, which offers resources to employers who wish to provide…