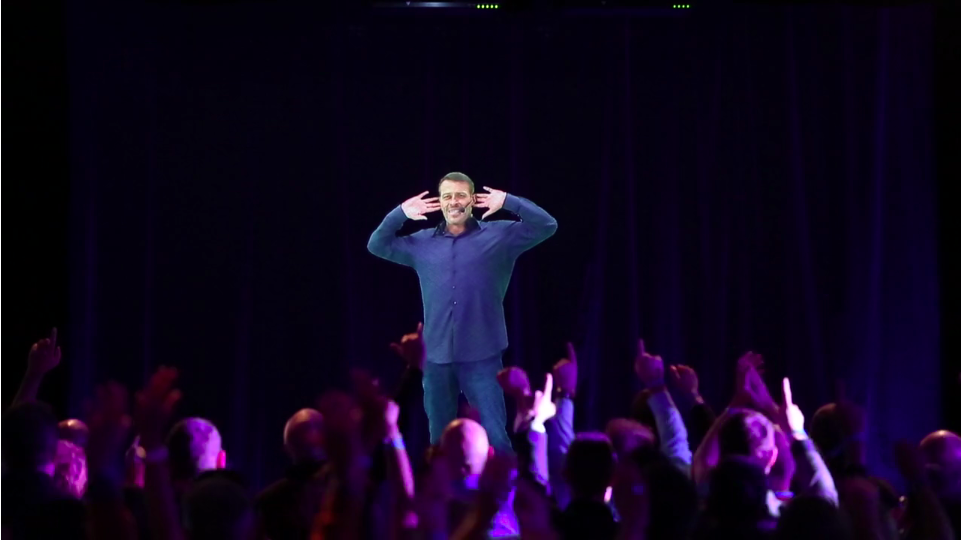 Tucked away in a remote office north of Toronto is a Toronto-based startup called ARHT Media. You’ve probably never heard of them, but the technology company is backed by some of the most powerful people in entertainment, including Larry King, Jason Bateman, Irving Azoff, Kevin O’Leary, Paul Anka, and Michael Bublé. In addition, ARHT Media also has Carlos Slim, one of the richest human beings in the world, as an investor.

“HumaGrams” are the future of how consumers will engage and interact with a brand’s products or services.

ARHT Media is lead by CEO Paul Duffy and was founded in 2013 by Rene Bharti and Paul Anka. “HumaGrams” are the company’s forte and the future of how consumers will engage and interact with a brand’s products or services. ARHT stands for Augmented Reality Holographic Technology and the term HumaGram was coined by the company to describe its “interactive human holograms.”

ARHT built its holographic technology from the ground up, based upon a desire to create a “scalable, repeatable and transportable form of 3D without the use of special glasses,” according to Duffy. Confused? You bet. ARHT Media’s HumaGram needs to be experienced to be believed. You have to physically be in the same location to understand why this technology is so powerful.

ARHT is trying to become the company that takes traditional media and give static video more depth. ARHT captures your data while you’re engaged with the HumaGram through its proximity technology, and this strategy is how it’s building an e-commerce platform.

We had the opportunity to connect with Duffy about ARHT Media and the future of HumaGrams:

What is a HumaGram?

A HumaGram is a Digital Human and HumaGrams themselves can be living or deceased, live or prerecorded, fictional people. We put them into this cinematic content and have a series of proximity technologies that allow us to actually track and measure what viewers are doing with our content. We are doing the same level of analytics that Google is doing online, but offline. Which is phenomenal because that market is enormously big. These sensors, they see you and know male versus female. Young versus old and we can do groupings where we can do families.

But ultimately, what we are looking to do is gauge levels of engagement such as how long have you been standing in front of that piece of content and then serve you relevant content based on what you are looking at. So, if you’re looking at a window display at Harry Rosen, depending on how long you stay I might throw you a coupon, or burst your phone some NFC, Bluetooth, beacon, or geo-fencing, and if you got my app I’ll send you an offer. And while I’m doing all that I’m capturing all your data, not just from your phone, but from you as an entity — like your skeletal structure, your facing ratio, your posture — while watching the HumaGram.

So how does it work?

We are taking flat 2D screens and into a full 3D experience that is cloud-based platform and tracks consumer engagement, then make it available as an e-commerce platform. Each human hologram experience captures your intent because we have programmatic algorithms we can actually create the entire viewing experience and engage you deeper through direct interaction.

This is the stream of the e-commerce platform behind our technology and ultimately the marketing objectives of the client: get engagement. Engagement leads to basically identification. Identification to conversion. Conversion goes into a loyalty program.

Who are some of your clients?

We have worked with Tony Robbins (holo ported him into Miami to Australia), TicketMaster, a Biotech company, and Harry Rosen. With Harry Rosen, 110,000 people walk by during the holiday season from December 1st to December 24th. Believe it or not, 31,000 people walked by and interacted with Vincent the HumaGram. Standard media is one in 10,000. Now that’s engagement.

How much does it cost to get a HumaGram up and running?

We make everything in-house and it is not expensive, only several thousands of dollars.

Apart from building cool technology, what is ARHT’s goal?

The technology we are building is so cool and has so much impact. We want to license this technology into as many applications as possible. Bring it anywhere that we can have human-to-human interaction. So ultimately what that means is HumaGram to learners, like Tony Robbins; HumaGram to consumers, HumaGram in corporate settings for keynote presentations; HumaGram to worshiper; and HumaGram to citizen, such as politicians or public service organizations to utilize digital people to facilitate communication regarding services, fees or announcements.

How AI and empathy could modernize the role of retail associates

I still remember very clearly back in 2012, when I walked inside Eddie Bauer, nervously dropping off my resume with the assistant manager, expressing…