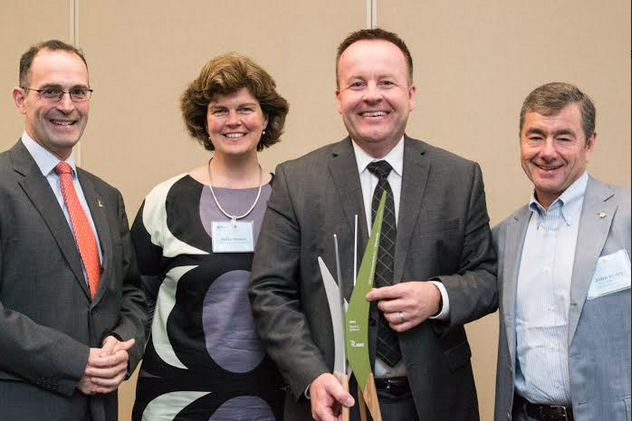 According to the Business Development Bank of Canada (BDC), there’s a high-quality mentor in Medicine Hat, Alberta, and his name is Ryan Jackson.

The inaugural winner of the 2014 BDC Mentorship Award. Jackson is the principal and managing director of RAMECO Consulting Group and the former Entrepreneur in Residence at Medicine Hat College.

“I have been lucky to have had several great mentors in my life, so it was important to me to pay-it-forward and become a mentor myself,” said Jackson. “You can feel pretty isolated as an entrepreneur so it’s important to have someone in your corner that wants to see you succeed as much as you do. A person that isn’t afraid to tell you when you’re heading down the wrong path and someone you can openly commiserate with. I find it incredibly rewarding and I am honoured to be recognized.”

The BDC Mentorship Award recognizes an outstanding Canadian business mentor credited by their peers for providing valuable advice and support through a significant commitment of time and effort that has led to the creation and growth of Canadian companies by building their mentees’ professional skills and abilities.

“Our research demonstrates that entrepreneurs that receive external advice often outperform their peers,” said the BDC’s Michel Bergeron. “We hope this story serves as inspiration to encourage more people to provide young entrepreneurs with the invaluable support and encouragement they need to grow.”

Meanwhile the Canadian Youth Business Foundation’s Julian Deans said “Mr. Jackson truly embodies all of the qualities we were looking for in a winner,” and that “a number of his mentees wrote to us in support of his nomination and all spoke highly of his endless support and willingness to offer his time and expertise in their pursuit of success.”

Everyone’s heard of a DIY project, but not many know that you can also do your own mortgage — and get cash back in…