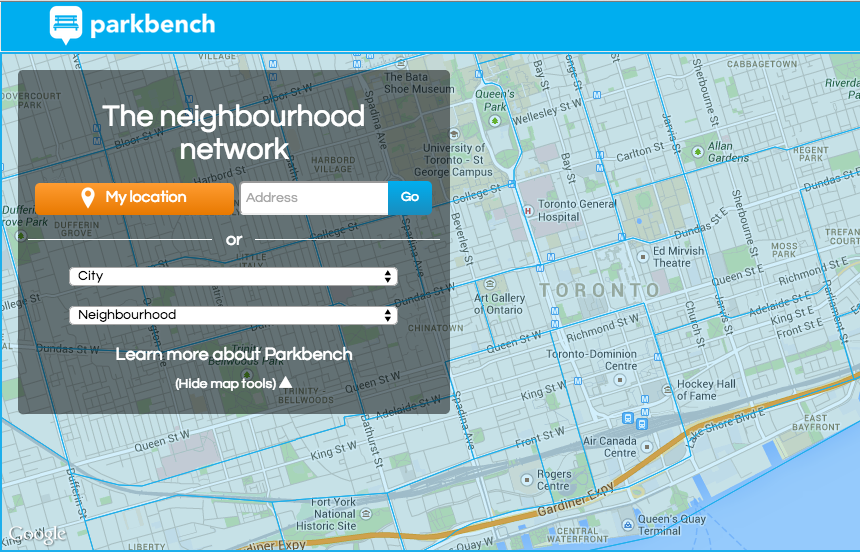 In the beginning, ParkBench CEO Grant Findlay-Shirras said he was simply looking for a solution for himself and his business partner, to promote their own businesses.

He had a fitness business and his business partner was a realtor, both living in Liberty Village in Toronto. The pair thought to create a website just for the neighbourhood, which became LibertyVilliageReviews.com. Then they figured they should think bigger, so they bought the domain names for about 160 different neighbourhoods, in front of the suffix “reviews.com”.

They were sites where local businesses could put up daily deals and sales for their businesses while others could write reviews. “As people started telling us their issues I thought this might actually be a business, a platform where people can go to every day to find all the deals, sales, events for the neighbourhood, to be able to talk to those in the neighbourhood,” Findlay-Shirras told BetaKit.

Eventually they morphed all the sites into ParkBench.com, which now serves nearly every neighbourhood in the Greater Toronto Area. They were still “this Yelp-Groupon fusion thing,” said the founder, but along the way they brought on an events component, a social messaging component and even a real estate component, to give locals all the top options they had in their area. They were able to convince realtors, mortgage brokers and and restaurants to buy ads in each neighbourhood profile, leading the startup to profitability within 18 months.

Initially ParkBench didn’t have enough traffic, so they had to sell exclusive ads to realtors looking to be featured on the site. To keep it reliable to the locals who went to the site for real information, they vetted those realtors who they would advertise, making sure they really were among the top in their area. It seemed to have worked out well for them.

Next up is the August 1 launch of the Vancouver ParkBench, including all of the Lower Mainland. After that they’ll target New York and Boston, likely followed by Calgary or Montreal.

Findlay-Shirras also wants to change up the review-writing system. He said he wants to make it more data-centric, eliminating the subjective four or five out of five star ratings of percentage scores. He figures there’s a lot wrong with reviews today, especially as mobile takes over, and people don’t really like to write huge reviews on a mobile phone. As well, just because one person gives a bar four stars, that doesn’t mean that another will like it.

What’s important is whether someone can read the review and know whether its a good place to hang out with friends, take out someone on a date or bring the family for dinner. Or whether it has great thin-crust pizza, for example. “We’re trying to get people to write more data-centric reviews so that its more useful and can give better recommendations,” he said.

It’s exciting times for ParkBench, on its way to expansion and looking good in the way of finances.