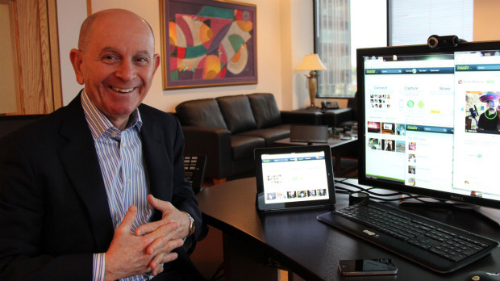 Before the summer had started, the Financial Post had already dubbed then Keek CEO Isaac Raichyk as “clearly an anomaly” in a world of tech startups being led by 20-somethings. He was set to build up the video-focused social network to that of a Facebook or Twitter. According to an investor in Keek, an initial public offering or an exit was imminent.

The summer of 2013 followed, and as Ben Dummitt explained in a recent piece that appeared in the Wall Street Journal, the investors never showed up. Raichyk and the company unceremoniously “split”. Keek did get it’s exit though, but it wasn’t to a larger tech competitor: the company has agreed to sell itself to Primary Petroleum Corp., “a Calgary-based listed junior energy company that doesn’t actually produce any oil and gas and is hoping for a brighter future as a tech company.”

Keek was founded in 2011 and called itself a new social networking platform that allows users to create 36-second videos (“keeks”) using webcam, iPhone or Android devices and share them with others around the world. Users follow, subscribe and respond to videos with either text comments or video replies (“keekbacks”).

Riding on the heels of $30.5 million worth of venture capital that came in three consecutive rounds from 2011-2013, the company already had 50 million users in more than 200 countries by June. Today that number stands at 60 million, with about 15 million keeks sent. Kim Kardashian was even using the app.

Unfortunately the startup seemed to be trying to court a user base that Twitter’s Vine was trying to wow as well. Snapchat was also busy attracting downloads over the past few years just as Keek tried to gobble up fans. “I believe Keek is becoming a legitimate video-centric alternative to Twitter and Facebook,” Raichyk told the Post in July. “We don’t really look at it as competition…we are not experiencing any slowdown in our growth.”

Dummett mentioned in his article that Gary Clifford of Keek investor Penfold Capital, which took over from Mr. Raichyk as Keek’s interim chief executive, “declined to say why Mr. Raichyk left. But he said the leadership changes followed ‘missteps’ by the startup’s management and an internal debate on when Keek had sufficient followers to start trying to make money instead of just spending it to build up the network.”

But apparently now, the changes spurred by shareholders, was “to make sure the company never has to think about cash again.”

As for the former CEO Raichyk, prior to Keek he had already founded three successful tech companies, including Kolvox Communications, which he took public in 1994.

So what’s the moral of the story here? Well, with limited information, all I can say is that obstacles to success is all too common in tech startups, particularly those who are competing (whether Raichyk wanted to admit it or not) with the likes of the Vines of the world. Keek Inc. now has more money than it needs (so an investor said) and as for Raichyk, it’s safe to assume that we’ll be hearing from him sometime soon.