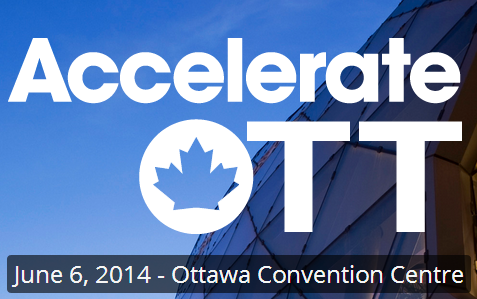 The c100’s Accelerate series is coming to the nation’s capital on Friday. The event looks to continue its usual strong networking and insight delivery from events like AccelerateTO, AccelerateMTL and Accelerate AB.

The event goes down this Friday June 6 at the Ottawa Convention Centre.

“AccelerateOTT is about to hit the streets and take the city by storm! After an amazing inaugural event last year, we want to raise the bar by making this year’s bigger and better!” read the AccelerateOTT website. “AccelerateOTT 2014 will bring together high potential start-up companies, Canadian and American investors, as well as technology thought leaders. We’re also bringing back the start-up showcase and have pulled together a one-of-a-kind lineup of speakers and panelists, with incredible networking opportunities.”

The event features these talks:

– Why you’re probably wrong about your MVP by Brandon Reti (VP of mobile at Breather, Montreal)
– Design Thinking by Jennifer Sarich-Harvey (senior interaction designer at IDEO, Boston)
– The future of Wearables by Tom Emrich (reporter at BetaKit, Mobile Syrup and Wearable App Review) and Mladen Barbaric (CEO of Pearl Studios)
– State of Early Stage Investing in Canada by Roger Chabra (general prtner of Rho Canada Ventures) and Jevon MacDonald (VP at Salesforce)
– Transformative megatrends and the rise of the Maple Syrup Mafia by Allen Lau (CEO of Wattpad)
Accelerate OTTC100eventnetworkingstartupsTech