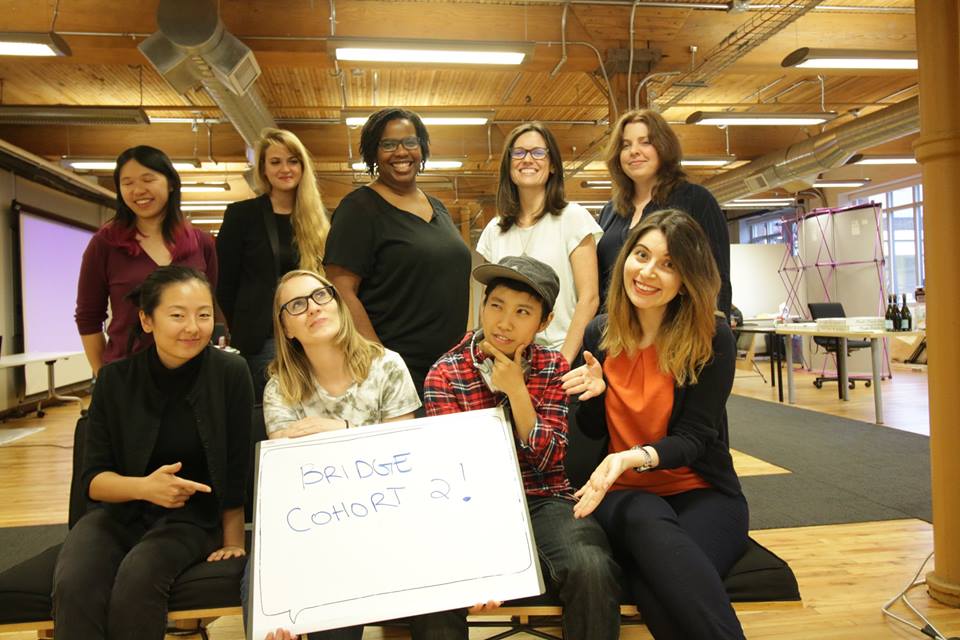 In tech publications today, you regularly see articles on building inclusive work spaces for women and removing the stigmas of “brogrammer” culture. Groups like Move the Dial highlight the institutional barriers women face in their tech careers. Essays like the one published by former Uber software engineer Susan Fowler detailed specific offenses, which brought about swift and dramatic change within some of the world’s biggest tech companies. There are regular series dedicated to training managers on how to not become the next Uber.

For Bridge’s program leaders, the challenge was not about getting more women into the pipeline, but helping them move further through it.

When it comes to technical skills, initiatives often focus on getting more women into the pipeline. The belief is that the earlier you start getting women into STEM (Science, Technology, Engineering, Mathematics), the more likely you are to end up with higher numbers of women in the tech ecosystem. According to the Where is the Dial Now? report by Move the Dial, only 29.6 percent of all women graduates are STEM grads; however, women make up over half of all university graduates. It then makes sense to encourage and motivate girls and women to become interested in STEM.

Some start very early, like Canada Learning Code, which has an arm dedicated to teaching school-aged girls on the basics of code.

For Bridge program leaders Emily Porta and Lindsie Canton, the challenge was not about getting more women into the pipeline, but helping them move further through it.

The program is for women with some work experience in the tech industry, either in design or software development, and a desire to move up in their careers. Initially incubated by Toronto development firm Rangle.io, the Bridge program is an initiative to “give women the tools they need to get better jobs in the tech industry, either at Rangle or another tech-related company.” Porta and Canton are now looking to expand the Bridge program to other tech firms in the community.

Building a Bridge, not a bootcamp

Although its look and feel are similar to bootcamp classes, the Bridge program has small cohorts of 10 to 12 people part-time and an explicit community focus that makes it unique.

This way, continued Porta, the women are not only performing specific on-the-job actions, but also gaining leadership and teamwork experience that help them develop the professional skills necessary to advance their careers.

“In the product design program, we employ modern pedagogy and we do a lot of interactive workshops,” Canton said, mentioning that the women get both project-based learning and in-class practice.

The program is also different from a traditional bootcamp in the sense that Bridge focuses on women who have some prior experience, rather than those looking to break into the industry. In addition, Bridge is free for participants, sponsored by the hosting companies as both a recruiting and community building exercise.

“In many ways, we rely on bootcamps because they bring people from non-traditional or non-technical paths,” said Porta. “They take those people from having no skills, or very few skills, to a higher level. And after that is where we come in”

Porta added that Bridge is focused on women in tech not because they can’t find jobs, but because many women in tech struggle to get the job they want, whether that’s a leadership position or just a next-step promotion. With so many organizations focused only on getting people into the pipeline, next-level skill development is often overlooked for folks who don’t have a lot of support or resources coming from their networks. The challenge is worse for women who did not attend more traditional educational institutions.

“It’s much harder and slow-going for women to get the same result as people who have had the privilege of taking more traditional paths,” Porta added. “My initial reason for founding Bridge was frustration around people saying, ‘we’d love to hire her, but…’ and then not having next steps to help people, specifically women, level up.”

Porta’s frustration revolved around how she saw qualified people – women in particular – receive limited resources to help with skill development even though “they have other qualifications.”

Emily Porta talking about what’s next for Bridge at the DITTO x Bridge event on September 7, 2017.

Unlike other diversity and inclusion programs that build networks or offer entry-level workshops for folks from marginalized backgrounds, Bridge was founded with the explicit goal of “helping junior developers and designers become intermediate to position them for immediate hire.”

In order to showcase accomplishments and support graduates, Bridge began giving graduation certificates at the end of 2017, starting with the Bridge for Product Designers beta cohort. In the future, the program will give certificates to all graduates, both for software developers and designers. However, Porta notes that “the students’ accomplishments speak for themselves in their portfolios, code repositories, and in the interview room.”

The need for support is clearly desired by the market. Given the success of, and demand in, the initial cohorts – there have been over 500 applicants for the first three – Porta and Canton are now focused on expanding the program to other companies to help more women.

Canton explained that the expansion of Bridge is part of what she sees as a necessary shift to multi-layered diversity and inclusion strategies in tech companies.

In a good diversity and inclusion strategy, she said, the first layer is basic anti-bias training or standard anti-discrimination policies. The second layer, however, is about taking action.

“Companies build individual programs but then don’t build them out.”

For Canton, the first step for individuals looking to take action is educating oneself on the issues, and explicitly recognizing your privileges. She recommends that anyone who wants to make an impact in diversity and inclusion ask themselves tough questions around what their privileges are and what they may have received because of those privileges.

“Whether you are an employee or the CEO, that’s the first step,” Canton said.

When a company makes a decision to move forward, its leadership has to step up to the plate and let the organization know diversity and inclusion are critical. When leadership supports groundswell employee actions, initiatives like Bridge spring to life.

Canadian tech leaders have echoed similar sentiments about the need for leadership to provide support in these circumstances.

“Diversity metrics are important, but it’s time to build better accountability, evaluation, and metrics,” said Dr. Sarah Saska in a BetaKit op-ed. “As the Canadian tech community better harnesses its “spidey senses,” we feel that Canada is well-positioned to develop a leading DIBs [Diversity, Inclusion, and Belonging] standard for the global tech industry.”

Porta and Canton’s goal with Bridge’s expansion is to provide a template that helps organizations get to action faster.

They plan to share the Bridge brand, framework, and system with other companies, so they can sponsor and host their own Bridge programs, building off an already-proven product instead of reinventing the wheel.

Encouraging leadership to step up is often the rallying cry of any organizational change, but one of the issues that plagues diversity and inclusion-focused initiatives is the lack of traction beyond the organization that founded them.

“We see some people creating good programs, but they are often under lock and key,” Porta said. “Companies build individual programs but then don’t build them out. They are not taking the next step to make a community initiative.”

While it’s not a bad thing that organizational diversity and inclusion initiatives help the company that founded them, Porta noted that it’s important to focus on the community you are helping from day one. This means individuals may end up working for other organizations, but Porta and Canton believe the net effect is more positive for the community at large.

“At Bridge, we teach a lot of things that we use at Rangle,” Porta said. “But these are also fundamental skills that can be taken to other jobs. So even if cohort participants don’t get hired at Rangle, they will be happier in their new job or more successful in their current job.”

This article is brought to you by Rangle.

Make an impact. Be Disruptive. Explore possibilities with Rangle.

“Accelerate your business growth and revenue.” This is the succinct slogan of the Traction conference returning June 22 and 23 to Vancouver. Geared for…