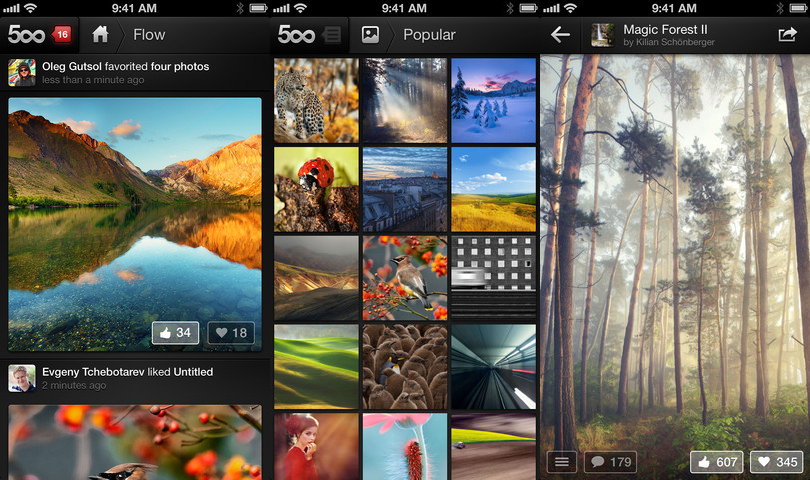 Hot off its recent partnership with CanvasPop as its print-to-order fulfillment partner for North America and last week’s acquisition of French iOS app studio Pulpfingers, Toronto-based Flickr alternative 500px today announced the release of its iPhone app. The company already has iPad and Android apps, and this release comes after a number of iterations and trial runs, which lead app designer Adam Shutsa said were necessary to settle on a design that showed off 500px’s community of photographers.

“We really wanted to get our amazing photography in everyone’s pockets. So we started developing a few prototypes for the iPhone app, going through some ideas and trends that were on the current release of iPhone apps like the sidebar menu and all these other things,” said Shutsa in an interview with BetaKit. “We decided those weren’t for us, we wanted to do things a bit different, something that would better show off the photography. So we came up with the current design which we’re all really proud of and it really shows off what our community can offer, fantastic photos.”

The company’s iPad app averages 45 minutes of user engagement per session, however, with the iPhone app Shutsa said they understand the use case is different and expect more like an average of five minutes. None of the photos are compressed, providing a high-quality photo-browsing experience that places the photos in a continuous stream of tiles with no border. With a tap a photo is enlarged, and users can browse through photos by swiping. It also comes equipped with the standard 500px functionality, letting users favorite, bookmark, comment, and follow users.

Unlike the iPad app, the iPhone app doesn’t have access to 500px’s marketplace, which lets photographers and users buy and sell prints and canvas versions of photos. It also doesn’t let users upload photos, since Shutsa said most of its users upload photos from their desktop. Whether it looks to integrate uploading and marketplace functionality or not, startups like Foap have been giving iPhone photographers a way to upload and sell their photos, with over 1.4 million photo uploads that are also quality-controlled by its community, in addition to the rise of curated Instagram communities like Instafocus.

However, 500px’s intent with the iPhone app for the time being was to truly enable users to view its collection of photos wherever they are. “It’s just [about] getting the world’s best photos in the hands of as many people as possible, we want to show off our community’s photos and make sure everyone has them,” Shutsa added.

With photos curated by both the startup’s editors and community, 500px continues to assert itself as being the best Flickr alternative for both professional photographers and anyone interested in photography. The recent Pulpfingers acquisition and today’s iPhone app launch show that the company wants to be everywhere, both in terms of geography and platform. Whether it can continue its success on a global level will be something for the company to tackle in 2013.

WeWork has confirmed the location of its fourth Toronto space. The new space will be located in Toronto’s Financial District at 100 University Avenue…