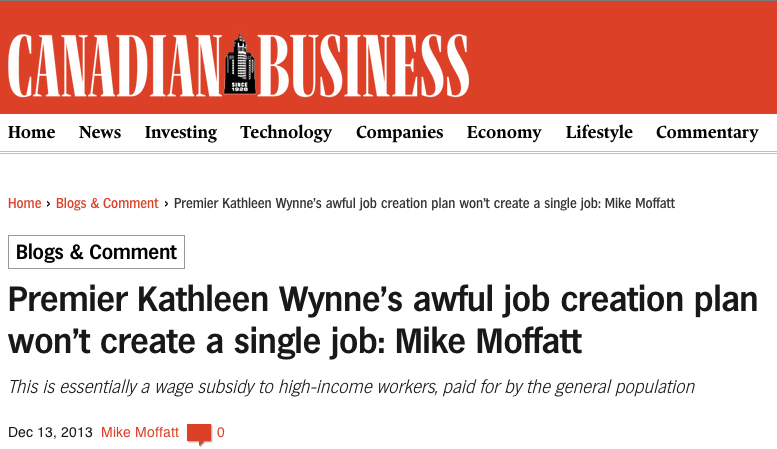 The Assistant Prof/Economist at the Richard Ivey School of Business wrote an opinionated column this morning calling Ontario Premier Kathleen Wynne’s new jobs concoction “awful”, saying that “skepticism turns to outrage” for what is easily “the worst Canadian public policy of 2013”.

Moffatt’s arguments started when he said Canadians should naturally question claims of job creation when tax dollars are being funnelled to corporation that made $2 billion in profit last quarter. “This is a plan that is explicitly designed to increase income inequality and transfer money from poorer regions of the province to one of Canada’s wealthiest cities and will likely not create a single new job,” wrote Moffatt.

The reporter explained that while the deal promises that “up to 1,700 jobs” will be added in the next six years, with the province providing “up to $190 million” in return, for a cost of $112,000 per job, it’s not all that it seems.

He offered that 80 percent of the jobs will go to Ottawa, a city with a healthy 5.7 percent unemployment rate, to people  in the Information and Communications Technology (ICT) industry that sports an even lower unemployment rate.

“Because of the low unemployment levels of both the city and the sector, the number of net new jobs created here is likely to be zero. Cisco will be simply luring away workers that would have worked for other ICT companies (or who would have been hired anyway by Cisco even without the handout),” he wrote. “This will help raise the wages of workers in that sector, but does nothing for jobs. Those jobs are already very well compensated, so this is acting as a wage subsidy to high-income workers, paid for by the general population.”

The deal won’t create jobs for the low and medium-skilled workers. A plan focused on laid-off manufacturing workers would have a worthwhile goal, argued Moffatt, but what the plan represents is the “exact opposite”.

“I cannot begin to even understand what the province is attempting to accomplish here. The net effect of the Ontario government’s new policy is to subsidize jobs in an already strong labour market, increase the wages of already high-income workers and give hundreds of millions of dollars in corporate welfare to one of the largest and most profitable companies in the world.”

The Globe and Mail’s Adam Radwanski briefly tweeted out his response to Moffatt’s piece, calling it “slightly over the top”, wondering “if we’re going to blame govt every time jobs are lost, not surprising if they’re going to be heavy-handed trying to attract them.”

Food concierge company Foodee, which facilitates meal delivery from local restaurants to workplaces, announced a $6 million Series A in a round led by…