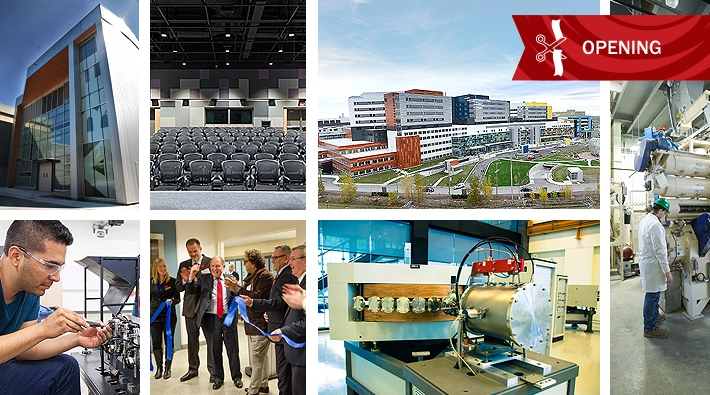 Innovation is driving the Canadian economy and the Canada Foundation for Innovation has compiled a great list of 10 newly-opened state-of-the-art research facilities across the country. Many of them have opened in the last number of months and specializes in agriculture, sciences, manufacturing, health, and water.

Wired for sound, and more

Opened September 23, 2014: The LIVELab at McMaster University will give researchers new insights into what happens in our minds and bodies when we make and listen to music.

How to build an ARC

Opened September 30, 2014: The University of Ottawa’s new Advanced Research Complex is a powerhouse of photonics and geosciences research

Beam it up: newest addition to Canada’s national laboratory for particle and nuclear physics completed

Opened November 12, 2014: Four new laboratories at the Canadian Food & Wine Institute Innovation Centre at Niagara College aim to give a leg up to Canada’s food and beverage industry

The future of manufacturing is adding up

Opened January 16, 2015: Mohawk College’s new Additive Manufacturing Resource Centre is introducing students and industry to a transformation in the way we make things

Research institute puts Canada at the forefront of health care

Opened February 2, 2015: To forge the future of health care, new facilities at the Research Institute of the McGill University Health Centre are helping to close the gaps between biomedical research, clinical medicine and population health

Opened March 17, 2015: The University of Calgary is partnering with its home city to make drinking water safer through next-generation wastewater treatment systems