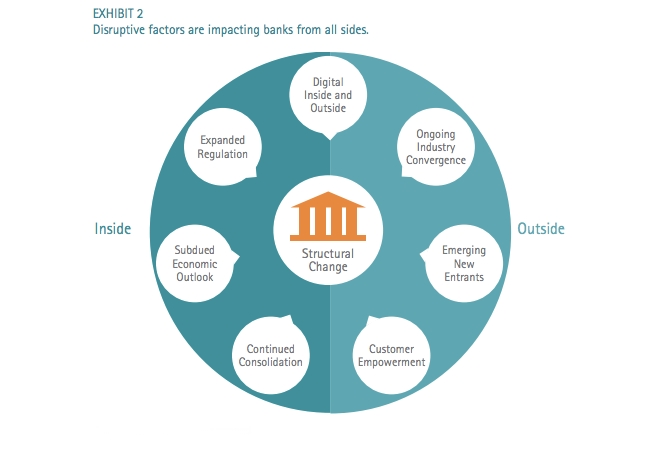 New technology alone will not change an industry. Change is about a collective shift in attitude and behaviour. Less than ten years ago AirBnB, Uber, or Car2Go would have been scoffed at; now, they seem almost inevitable.

In part one of this profile, BetaKit spoke with seven different Vancouver FinTech companies at very different stages of their business lifecycle to understand what drove them to launch. In part two, the founders of Grouplend, Payso, WealthBar, RentMoola, Payfirma, Voleo, and Koho speak to the social and demographic shifts that are aligning with the coming FinTech disruption in Canada.

“Expectations: millennial consumers have increasingly higher expectations from the products they interact with. Banks simply aren’t designed to keep pace with innovation. Every time a tech company bites off a portion of the banking ecosystem, it’s because they’re meeting customer expectations better than banks can.”

“Alignment: it’s more important than ever that brands align with consumers. Growing up with the information millennials have had access to has resulted in a generation of people who are global, long-term thinkers. They see the massive bonuses paid to executives and the old guys in suits and just think ‘that’s not me’.”

According to Payso CEO and co-founder Jake Tyler:

“There are two big trends driving change in the payments space. The first is that mobile phones are increasingly ubiquitous and smart. Second, is that cash is moving from something physical to something digital. The result is that sharing money is set to become as easy and ubiquitous as sharing a photo is today. We also have a generation that’s coming of age who have grown up with smartphones. They expect to bank on their phone and expect great consumer apps to help them do it.”

Tyler adds, “the role of banks in this landscape will change. Banks do a lot of things very well, but building consumer digital products is not one of them – this is not their core business and it’s not an area of relative strength. We see banks becoming platforms for moving and holding money, upon which people like us, and other businesses, can build awesome apps.”

Kevin Sandhu, CEO of Grouplend, agreed that “banking in Canada no longer works for regular Canadians.”

“The average Canadian consumer carries over $28,000 of non-mortgage debt,” he said. “The big five banks saw record profits of $31.9 billion last year. Those astonishing and record high numbers are not a coincidence. The banking industry as a whole has failed to innovate, resulting in high fees, high interest rates and poor customer service becoming the status quo. Canadians deserve better than this. With the technology available today, it’s silly to think that you still have to walk into a branch during business hours to do your banking or to have to pay the sorts of costs that traditional lenders charge their customers.”

Michael Gokturk, CEO and Founder of Payfirma, shared some data points on the challenges banks face:

“Last year, Accenture released a report that concluded by 2020, banks could lose 15 percent of their market share to technology companies,” he said. “We’ve all become increasingly dependent on technology that makes our lives more efficient especially from a procurement of services angle: Uber for transportation, Tinder for dating, etc. We require everything to be on demand through our phones and to be able to access it with the push of a button.”

“When it comes to payments, there’s a whole generation that barely uses physical money.”

“The new way of doing things via mobile, emphasizes stewardship, long-term appreciation and using technology to cut costs. Millennials have fuelled the transition away from traditional financial services and these digital natives are increasingly relying on computers over humans, even in the case of investments and loans.”

Gokturk went on to say that “when it comes to payments, there’s a whole generation that barely uses physical money and I think we will only see that trend grow. Whether it’s through cryptocurrency or credit cards, all transactions will be virtual. The numbers are there to prove it. According to Gartner, the global mobile wallet market is expected to grow by 35% a year until 2017, and mobile payment transactions topped $235 billion at the end of last year. These numbers tell a positive story to those of us who are enabling the technology and services around virtual transactions and the data they produce.”

Thomas Beattie, CEO of Voleo, added a historical perspective. “The 2008 crash and resulting recession has left an emotional scar on the investing public; young people don’t trust traditional investment advisors, brokers, and financial institutions (and rightly so),” he said. “Combine this with unpleasant and archaic customer experiences and you get a financial services ecosystem that’s unable to meet the expectations of millennials.”

“Everyone’s talking about the ‘great wealth transfer’, and the rise of the shared economy has demonstrated that young people want to co-own assets, use our scarce resources more effectively, and collaborate to make better decisions,” Beattie went on to say.

“In the past, talking about personal finances and investing was a faux pas, but the proliferation of social investing networks and FinTech solutions that promote collaboration has demonstrated that this long-standing social norm no longer applies.”

For Rentmoola’s COO and co-founder, Philipp Postrehovsky, the message is straightforward. “People expect to be able to make a payment for anything from anywhere. Convenience is KING.”

The current social climate well-established, each founder was able to speak to the Canadian FinTech space as it stands now, and where it’s headed.

“The FinTech space is the hottest sector in tech right now,” offered Koho’s Eberhard. “For a long time people have looked at money through a single set of lenses because that’s all they knew. Now companies like Lending Club, TransferWise, Simple are using marketplaces, information and technology to pull back the curtain. What we’re finding is that the status quo is outdated and you can do really innovative things while retaining all the security required.”

WealthBar’s CEO and co-founder, Tea Nicola, gave me an example of that innovation. “The ability to open a fully managed investment account online, without having to go into an advisor’s office, is a brand new way of doing investment management. It offers convenience and lowers costs and people are moving more and more towards doing more and more things online, even if it is money related. Meeting someone face to face is no longer an assurance of safety. With the information available at our fingertips, due diligence on a company is done much easier. Researching different advisors before meant going to their office for a face to face meeting and talking to them for an hour or so. With the new online model, you can ask your questions in a few seconds via email.”

For Payso’s Tyler, “payments are important. We can look at AliPay in China for a hint as to why. AliPay is China’s most popular online payment service; it is tied to Alibaba, the world’s largest e-commerce website. These two companies are very similar to their western counterparts PayPal and EBay, except way bigger. But AliPay doesn’t just provide an easier way to pay for goods online, it also offers a way to pay utility, rent and mobile phone bills. And its users keep their savings in money market accounts held with Alipay Yu’ebao. AliPay Yu’ebao has an asset base of 574.1 billion yuan, around US$93 billion, making it the 4th largest money market fund in the world.”

“FinTech in Canada isn’t as mature domestically as it is in many other markets, but that’s quickly changing.”

Grouplend’s Sandhu said that “FinTech in Canada isn’t as mature domestically as it is in many other markets, but that’s quickly changing. Well funded startups with talented teams are springing up across the country. We have a real opportunity to change how finance operates here, whether we’re talking about consumer credit, or other areas like personal investing or small business lending. The banks of tomorrow will look radically different than the banks of today. Technology-anchored newcomers are bringing with them the promise of upheaval to an industry that has remained stunted in regard to innovation for a very long time.”

“Today’s business is not just a single retail store or office,” Payfirma’s Gokturk said. “Businesses are physical and virtual, sales and marketing have become synonymous and have made businesses engage with their customers in person and via social channels.”  Furthermore, “businesses that are succeeding today are embracing sales across mobile, e-commerce and in-store/office environments. In order to maximize their returns, they turn to companies that enable them to sell across multiple channels and capture data about their business and their customers to see real-time trends and patterns.

“What keeps me awake at night is thinking about when commerce becomes truly frictionless, meaning virtual on both the merchant and customer side. This means no more physical wallets and cards, no more hardware upgrades and not being limited to a place or product. We are closer to this than ever before, and I think in the coming years we’re going to see a continued proliferation of new technology in the peer-to-peer, B2B, and B2C spaces in terms of reducing payment pain points. We will also see continued innovation in associated areas like security and biological authentication.”

Voleo’s Beattie was able to outline three main points of disruption across the investment sub-sectors.

1) The way investors consume information has changed drastically. Where access to more information was once considered a competitive edge, curating relevant information is much more so nowadays. There are three main channels that provide information to investors: (i) company press releases and financial statements, (ii) sell-side analyst research, and; (iii) financial media publications. There are pervasive issues with each medium, such as the tendency for companies to “spin-doctor” press releases, and the ulterior motives of investment bank research divisions. There are startups focused on changing this which we believe deserve shout-outs: Openfolio has created perhaps the most elegant social network for investors, Trefis allows you to adjust consensus estimates with an interactive breakdown of a company’s sales/earnings/EBITDA components, and Twomargins allows the user community to annotate company financial reports.

2) Passive investment platforms are likely what people have been reading/hearing about most in the media. Robo-advisers have a compelling value proposition for people looking for a next-to-zero hassle portfolio for very low costs. There is innovation within the Robo-adviser space as well with companies like Betterment offering a more academic Fama/French factor based investing strategy.

3) Active investing platforms, such as user curated portfolios (see: Motif), no cost discount brokerages (see: Robinhood), and group investment clubs (like ourselves) will all contribute to a more enjoyable (and hopefully profitable!), investing experience for both novice and experienced investors.”

As we look at the disruption happening in so many industries, there’s no questioning that the tech – software, hardware, machine intelligence and the cloud – is playing a vital role. Yet, it’s readily apparent that the businesses who are winning today are first and foremost those putting people at the centre of the experience.