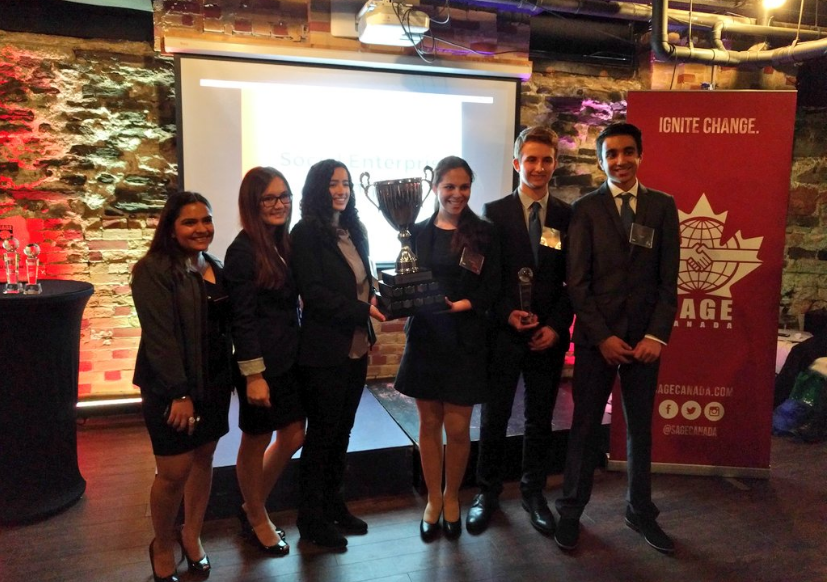 SAGE Canada, a nonprofit organization dedicated to helping teenagers become entrepreneurs, announced the winners of The STAGE 2017, a nationwide competition for youth entrepreneurs.

Toronto-based SpitStrips, which has developed a portable, resealable saliva-based strip that allows users to identify blood alcohol levels on their own, placed first in the Social Enterprise Business (SEB) category. Toronto-based Candy Cutlery, which creates biodegradable edible utensils to promote the importance of sustainability, placed first in the Socially Responsible Business (SRB) category.

SpitStrips and Candy Cutlery, selected from 12 finalists, will represent Canada at the 2017 SAGE World Cup in Odessa, Ukraine in August 2017, where they will compete with startups from around the world. They will have 13 minutes to pitch their ventures for a chance to win a first place prize of $2,000.

“It was one of the toughest competitions we’ve had and the level of professionalism and entrepreneurial spirit is outstanding.”

Prior to The Stage 2017, SpitStrips, Candy Cutlery, and several other Canadian youth-led startups received access to one-on-one mentorship, resources, and educational assistance from SAGE Canada and its network of entrepreneurs. Specifically, the students learned about launching a business, and the importance ethical business practices, social responsibility, civic engagement, and environmental awareness.

“Over the past seven years, we’ve seen the quality of youth entrepreneurs increase significantly,” said David Kwok, strategic advisor for SAGE Canada. “Last year, we won the SEB category globally but there was a huge drop-off between the first place team and the last place team. This year, it was one of the toughest competitions we’ve had and the level of professionalism and entrepreneurial spirit is outstanding.”