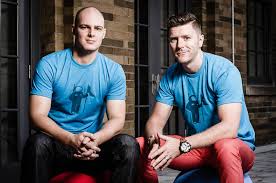 A colleague recently commented to me that some people in life are just on a mission. They have a “cause,” and they’ll devote much of their energy to defending or promoting that cause. Some will do it with a ton of positive energy, for the right reasons. Other times, well, we all know how people can get be a bit trolly and aggressive in their pursuit.

Within a few minutes of interviewing Raise Your Flag CEO Ryan Porter, I realized he has his cause, and he’s on a mission. It’s a thought-provoking cause, too.

Porter dropped out of college a decade ago, flew to Japan and got a job teaching english. Obviously he had a great time doing it, growing professionally and personally, because today his message to North American youth is that they don’t have to go to university to be successful in life. And he’s told that message to more than 750,000 high school students across the continent.

But it’s not the Peter Thiel-esque, ‘drop out of college and build me a company that I get 10 percent equity from’ type of deal. For Porter it’s important that we consider that the majority of high school students (45 percent) do not go on to either college or university. I’m sure the number is a little lower in Canada, but nevertheless, it’s significant.

“The status quo seems to be, ‘go to university, or I guess you could be Bill Gates or Steve Jobs,’ but no one is talking about the ‘middle everybody’ that literally makes the world go around!” he told BetaKit. “And that’s what we’re doing. We want to be the voice, we to be on the side of young people and we want to say you don’t need to do that if the career doesn’t require you to have it.”

Raise Your Flag is an online platform that initially launched its first version last year at SXSWedu in Austin, Texas, where Porter was a speaker. This week the startup launched its new “full-service” career advice platform that allows students to explore hundreds of career possibilities that do not require a degree. The free platform gives students (and those who may be unhappy in their current career) the resources needed to find and create multiple paths that lead them in the right direction.

There’s a lot of different factors that make Porter’s proposition an interesting one.

First, it’s true that our society over-values university degrees, which is a whole different discussion we won’t get into here. Secondly, a university degree doesn’t guarantee a job, nor do many people actually carry a degree related to their current position. (I studied journalism at the post-graduate level, but I’ve never set foot in a business course, a technology course or a computer science course).

Thirdly, not going to university doesn’t preclude a low-paying career, especially in resource-rich Canada. (Interestingly, Porter groups trade schools along with universities and colleges in the “you don’t have to do that” category).

Another factor to Porter’s proposition is that not enough young people actually believe in career advancement when they get their first job as a cashier at a Target, Canadian Tire or whatever other store. In fact, large retail companies really, really want young people to start and grow within the company.

“Even if someone is making under $30,000 a year, it still costs $3-4,000 to replace a single employee, so every year these companies are bleeding employees under the age of 25 at entry level positions, and the reason they’re leaving is that they don’t see career opportunities within that company,” said Porter. “So we started pitching these companies and they totally bought in right away. They said oh my god we need to show these young people that look, working as a customer service rep or a call centre agent isn’t the be-all and end-all.”

There’s three phases to Raise Your Flag’s plan: get young people in the door, get them through the door and keep them in the house. The first two phases involve providing quality information on the web platform and getting young people to create compelling profiles and young person-friendly resumes. The third phase involves ensuring strong communication between companies and prospective employees.

“It’s being clear on, if you come here and work the cash register for two years you will be a manger. If you work management on the floor for two years, we will put you in the head office in marketing. We want to be able to say that kind of stuff to young people so they see that trajectory,” said Porter.

He wants to see intrinsic cultural values change: why is it that in Japan the people who prepare food and work service jobs “are treated with reverence,” while in North America servers at restaurants routinely get stepped on.

On the recently hot topic of unpaid internships, I asked Porter what the company stance is. He squashed that pretty quickly, saying Raise Your Flag only supports jobs in which people are fairly paid for their work. You’re either an employee or a volunteer, not an “unpaid intern”.

He’s not necessarily telling people to avoid higher education either. Porter said some people who go to university shouldn’t be doing it, and vice-versa. “But what we don’t believe is that ’60 percent of future careers are going to require a degree.’ No they’re not. There’s so much on-the-job training that can be done that supplements so much of the learning that’s done in university,” he said. “I believe in  work experience: I believe that most work experience trumps education, I believe that experience is education.”

The public controversy that has exposed a nearly half a billion dollar taxpayer bailout for the cash-strapped MaRS Discovery District continues to heat up. The Toronto…