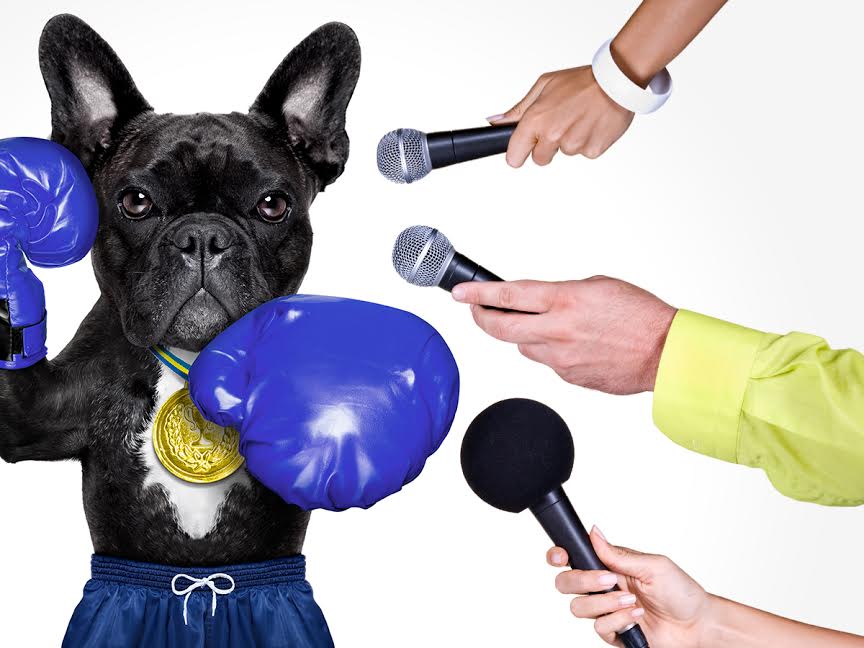 Faithful wearable enthusiasts got a treat last night at the MaRs Discovery District during the June meetup for We Are Wearables Toronto, which focused on the future of a surprisingly growing wearable industry: the pet sector.

WWTO partnered with Best Buy Canada to bring together experts in pet wearables and a space for demos of up-and-coming startups taking the lead. PetBot, a smartphone-controlled bot equipped with a video camera, allows you to see your pet when you’re not home and dispense treats whenever you want. Binatone showed off its Motorola monitoring products, including a training collar and remote called the SCOUTTRAINER25 and SCOUTTRAINER50, which allow you to communicate with your dog via vibration, static, and even voice commands via a push-to-talk function on the collar.

Despite the impressive tech, it was the zoo animals that had the crowds piling in as people scrambled to get a selfie with animals like Moxie, a therapy dog from SickKids whose GoPro video got featured in Mashable, Jasmine the baby kangaroo, and King Julian, the ring-tailed lemur.

New friends I made last night at @WeAreWearables pet edition, an event exploring all the w… http://t.co/aI5Q4mtnoY pic.twitter.com/dBg5wsDBGf

The event kicked off with a few words from Tom Emrich, founder of WWTO and BetaKit Senior Editor (BetaKit is also a WWTO sponsor), who announced that We Are Wearables would be opening an Ottawa chapter. Zayn Jaffer, director of merchandising for emerging businesses at Best Buy Canada, remarked that he was excited for events like WWTO that put the spotlight on a fast-growing industry. “I’m extremely passionate about wearable tech and where it’s going,” Jaffer said, adding that the company was looking at sport and baby products among other wearable possibilities. “But I’m most excited for pet wearables and how we’re going to build awareness in this category.”

Betsey Fore, CEO and founder of Wondermento, a hardware company looking to build a female-focused lifestyle brand, talked about her start in the pet wearable space with Wonderwoof products. Like a FitBit for dogs, Wonderwoof uses an adorable bowtie wearable to help you track your pet’s sleeping, running, and walking habits through a smartphone app. “Wonderwoof was founded on the premise that women are key here, and a lot of people are choosing to have dogs instead of children,” Fore said. “We’re starting in the pet space with Wonderwoof and moving on to crafting and fashion; there’s a whole world of wearables to come.”

Dr. Adam Little, director of partnerships and innovation at LifeLearn, followed Fore’s discussion to talk about the inevitability of collecting pet data and how this type of technology would empower animal patients who can’t verbalize their symptoms in an outdated veterinary industry. “Fifty per cent of animals are obese, and vets just say, go get your animal to lose weight and come back in a year,” Little said. “That’s not a sustainable strategy.”

Little added that, as 50 per cent of people don’t go to the vet for an annual exam, wearable tech will democratize otherwise expensive diagnostic tests. “I think what we’re going to see is veterinarians build relationships around the data of a specific patient year-round, which is different from how we see animal health care today,” Little said.

A panel followed, moderated by Emrich, with Fore, Little, and Jaffer joined by Brad Pattison, TV host of Unleashed and bestselling author of Brad Pattison Unleashed, and Jon Brody, director of sales at Binatone, for a discussion on the future of pet wearables. “I definitely agree that it does make a better pet owner,” Jaffer said. “I know people who have these pet wearables and products, and they’re now taking their dogs for longer walks and tracking how long they’re resting for and how active they are. So I think it makes you more responsible for that pet.”

Pattison, however, did express some concerns with the way that pet tech like cameras and automatic treat dispensers could be used. “One of the things that animals need is touch,” Pattison said. Though Pattison admitted that he uses Petcube, a remote wireless pet camera, to check on his dog, he said these tools should be used more for peace of mind than a method of pet training. “There are massive benefits out there for pet training but what I hate seeing is owners having expectation that this will train my pet. As leaders in this marketplace, we have the responsibility is to know this animal has feelings, thinks, has a heartbeat and is a living being.”

Brody said that, ultimately, this type of technology would only strengthen the emotional bond that people have with their animals – especially those frustrated owners who struggle to train their pet and end up putting them in shelters. “I think having more data and knowledge and the ability to correct behaviour before the owner gets frustrated, I think that’s the message,” Brody said. “As these new technologies come out, they’ll give us the ability to forge that bond.”

theScore’s Canadian-made sports app has been named among the “100 Best Android Apps of 2013” in PC Mag. theScore was one of only two sports…