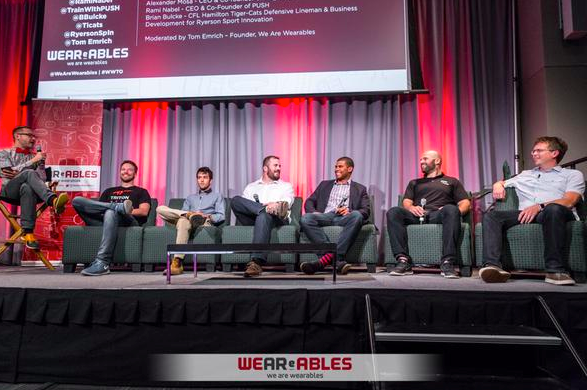 While much of the conversation surrounding the upcoming Pan Am games centres on local frustration with the HOV lanes, BetaKit Senior Editor Tom Emrich drew inspiration from the games for this month’s We Are Wearables event in Toronto, where the focus was the impact of wearables in the sports industry.

To kick off the night, Marie O’Mahony, curator of Design Exchange’s Smarter. Faster. Tougher exhibition honouring sportswear, technology and art, talked about the inspiration for the exhibition. Tristan Lehari, CEO of TritonWear, smart wearables targeted to swimmers, and Alexander Mosa, CEO and co-founder of the MagniWare second skin, also had the chance to tell the audience how they were disrupting the sports industry.

In an industry that has relied for years on outdated methods of tracking, like stopwatches and video playback, wearables seem like the most sensible route for athletes to track their progress. In a panel discussion, the participants weighed in on the pros and cons of emerging technology.

“There’s a stigma in the locker room like, is this an advantage, or an ankle bracelet?”
– Brian Bulcke, Tiger-Cats

Brian Bulcke, a CFL defensive lineman for the Hamilton Tiger-Cats who works in business development for Ryerson Sport Innovation, said that there are concerns among athletes about breaches of privacy. “There’s a stigma in the locker room like, is this an advantage, or an ankle bracelet?” Bulcke said. “Coaches constantly want to know when you’re asleep, when you’re going out, and they’re constantly keeping tabs on you.”

The notion that wearables could be used for good or bad was a hot topic for the night.

Rami Nabel, CEO and co-founder of PUSH — which makes wearables for athletes to improve their performance — said that it was important for the coaches and athletes to establish a healthy infrastructure of using it. “We’re at the cutting edge at this point where there’s a lot of room to understand how this is going to be implemented,” said Nabel. “The big focus is to make sure that the coach is not creating a top-down mentality. This is not something that’s coming from the GM or head office. This is implemented for the sake of improving an athlete’s performance.”

But Mosa presented a more ominous possibility for the way that wearables would be used. “What’s going to happen as the data becomes more contextualized, not only for an individual athlete over the course of their career, but between athletes, is that they turn into stocks,” he said. “What happens is when you have this contextualized data on one athlete between different fields and teams? I think the economics of the owners of sports teams are gonna be impacted most by this because they’re gonna know which stocks to pick.”

Dale Fallon, director of product management at Sportsnet and NHL Digital, added that it could hypothetically affect contracts. “Let’s say a hockey player is getting into his 30s and slowing down a bit, but it’s not a big deal because he’s a smart player,” Fallon said. “But during contract negotiations, the team slides a chart saying that they’ve been slowing down, and their contract has a clause saying that if they slow down, they’re allowed to nullify their contract.”

At Sportsnet, Fallon stressed that one of the bigger opportunities was around fan engagement. “There’s tons of data that’s going to be collected, but is that something that fans want?” he said. “I think it’s fair to say that fans are interested in moments that are curated and not shown on the network.”

The biggest advantage of wearable technology is instant access to highly accurate data that can be compared and contextualized. But for Greg Douglas, a two-time Olympic sailing athlete, said that athletes know themselves better than a wearable can for now. “When I was at my peak performance and my peak training, if I went to bed five minutes later, I knew that my performance would change the next day due to my five minutes less of sleep,” Douglas said. “We don’t have to go through a machine to get that data. Technology has a long way to go to catch up to that.”

The panel ended off with a pitch from Breathaliver, a wearable breathalyzer that detects your level of sobriety and arranges a ride home from your location, and winner of Mays’ WearHacks competition, in addition to an official announcement from Onyx Motion about the launch of its Indiegogo campaign.