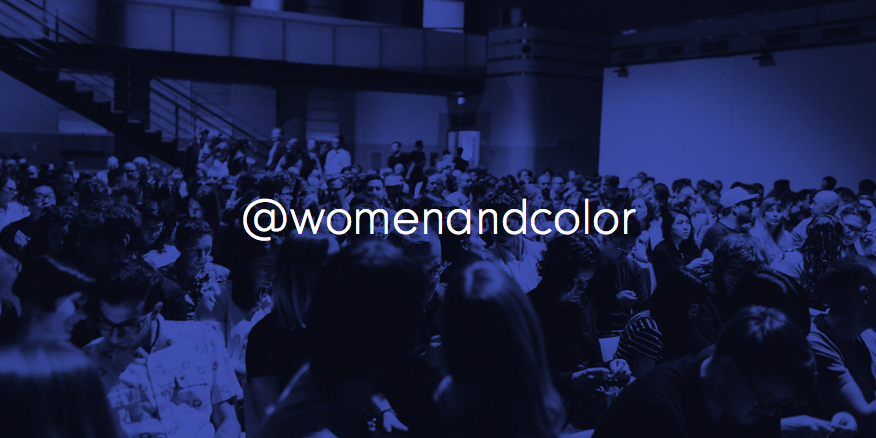 Thanks in large part to social media, the voices of women and people of colour calling out racism and sexism in many spheres of public life have been amplified. Between humorous resources like this Tumblr dedicated to all male panels, to more in-depth pieces on the repercussions of systemic racism and sexism in daily life, it’s almost impossible to be working in the tech space without being conscious of the fact that men are at a great advantage in every facet this space, including raising funding, representation, and even seemingly gender-blind issues like rates of acceptance rates of contributions in open source projects.

Mohammed Asaduallah, a product manager at Format, is one of many who have been affected by these conversations. “I was becoming more aware of my privilege as a man, and part of it was working with many women who considered themselves feminists. And learning from them and being more educated and aware of issues that women come across especially in tech-related fields and jobs, day-to-day,” Asaduallah said. “The other part of it was that I was starting to realize that I was underprivileged as a person of colour, so whether it was job opportunities or even dating, I just found an overall lack of diversity in tech, especially in a multicultural city like Toronto, as a bit concerning and discomforting. These things led me to be more aware and be mindful of it but I wasn’t sure how to go about it.”

These thoughts came to a head when Asaduallah looked at an event page that was in its early stages of being organized, led in part by someone he considered a feminist, figuring that the speakers would go beyond the usual white male roster that tends to dominate; while the speakers were half men and half women, there was only one POC.

“There wasn’t a clear path to how Women and Color started, it was just a mixture of my environments and various touch points that triggered one thing after another.”

“I guess just in that moment it was like okay, this is it, I can’t leave it someone else to advocate for diversity in tech especially in Toronto, and I can’t have someone who will only advocate just for women’s rights and not for women of colour,” he said. The latter point seems to be an issue when discussing diversity in tech — often, organizers or hiring managers think the blanket goal of “hiring women” is enough to address the issue of representation. However, white women are often the beneficiaries of these diversity initiatives, leaving out other marginalized groups that intersect race and gender.

Working with Format developer Laura DeGroot — whom Asaduallah describes as one of the many feminists he’s learned from — the duo have launched Women and Color’s online directory, which has launched as a small step towards alleviating the lack of representation in tech conferences. Speakers on the directory that identify as women and/or people of colour can sign up according to their area of expertise, and the directory is separated according to topic, such as brand strategy, product management, and development.

“There wasn’t a clear path to how Women and Color started, it was just a mixture of my environments and various touch points that triggered one thing after another, and that event and speaker list was the final straw for me before I felt I needed to do something,” Asaduallah said.

Asaduallah said that one of the common excuses that he hears from event organizers is that they looked but just “couldn’t find” women or POC — often, the issue comes from organizers reaching out to their networks or circle, which is likely mostly white and/or male. “They’re already going the convenience route, and once they’ve reached out to their networks they realize that there aren’t enough women or enough POC, and they need to fix this,” he said, adding that ‘fixing’ the issue often just entails sending a few tweets or updating their event page without actively reaching out. “Then they say ‘Oh, we tried’, but we didn’t find women or POC because we couldn’t find them. That’s generally one of the issues or excuses that I hear.”

While this has only launched as an online resource for now — and only features speakers in the Toronto area — Asaduallah hopes that the work of Women and Color goes beyond the directory and turns into a community. He’s launched a Facebook group to go with the resource. “I would like to have Women and Color become a platform to provide support for women and POC because I don’t want to limit this to a directory, I want to shape this and grow this further.”

A resource like this doesn’t completely remove the systemic issues that create a community that lacks adequate representation of women and POC in tech in the first place. There are countless studies on the barriers facing women and people of colour in tech, including the fact that women often have to provide more evidence of competence than men and are seen as bossy where men are seen as assertive, and people of colour — especially women of colour — fear backlash for speaking out and lack diverse mentors or access to resources due to negative stereotypes about their background. As many have pointed out, this issue of representation goes beyond just having women and POC represented at events, with the ever-present risk of their tokenization.

At the very least, though, it’s a step to further ensuring that the phrase “there are no women and POC tech speakers” remains an outdated excuse. To support Women and Color, send feedback to hello@womenandcolor.com or sign up on the platform here.

The Canada Economic Development (CED) for Quebec Regions is calling for proposals for its new Incubators and Accelerators Driven by Excellence (IADE) initiative. The…