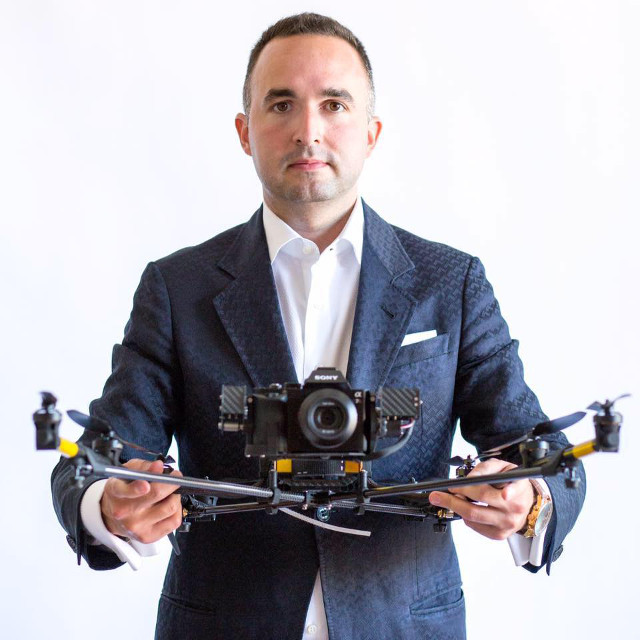 Adam Sax has always had a close connection to tech entrepreneurship; when he was 13, he started a data centre in Toronto before selling it seven years later and trying his hand at real estate development — before he sold the real estate companies he owned in 2013.

The itch to return to the tech space was there, but with stronger roots in the real estate space, Sax decided to it would be best to combine his knowledge of the two spaces he knew best and see if it would take hold. He started a drone company specifically focused on context photography for high-rise developments and the film industry, but according to Sax, “As soon as we got our site up, we had calls from Fortune 500 companies asking us to try something different for them. At that point, it was a ripple effect.”

“We’ve had a first-to-market approach. That’s been our strategy since day one since a lot of our competition are illegal drone operators.”

Today, Toronto-based Sky Guys has expanded their business to the oil and gas, large-scale manufacturing, and mining exploration industries with the goal of reducing the risk to employees collecting valuable data. Sax gives the example of using Sky Guys drones for pipeline inspections (an industry seeing a sharp rise in safety incident rates) and manufacturing plants that usually have to send engineers to dangerous areas to find potential flaws in equipment.

With $500,000 in funding from private investors including OMX founder Nicole Verkindt, Sky Guys has established offices in Toronto and Vancouver, with plans to open an Alberta-based office this year.

“I am confident there is a big future for UAVs, especially in the more traditional industrial sectors,” said Verkindt. “I believe in the team at Sky Guys, and I am also keen to be a part of a company that will take a leadership role in collecting, analyzing, and making sense of the big data that comes from their work in the UAV sector. I am excited for what the future has in tow for this bright team and company.”

“We’re developing our own proprietary technology, but the software side is where the juice is,” said Sax. Rather than having enterprise manually sift through terabytes of data collected by drones before even sending a team to fix potential problems, the company is tapping into deep learning and artificial intelligence so the drone software can point out flaws immediately. “We’ve partnered with local universities like the University of Toronto’s aerospace division, and we have aerospace engineers come up with really interesting proprietary technology to develop our own drones and take it to market in 2017.”

Sax said that while part of the challenge of working with enterprises is that they’re “scared of new technology”, drone technology specifically made for oil and gas and manufacturing isn’t widely available, which the company is taking full advantage of. Currently, Sky Guys is pursuing tech patents that can apply to every drone; through a partnership with a UK-based company, Sky Guys is developing hydrogen fuel cell technology to get drones in the air for four hours, rather than 10 to 15 minutes with traditional battery-powered means.

“We’ve had a first-to-market approach. That’s been our strategy since day one since a lot of our competition are illegal drone operators. A lot of companies in big industries are having trouble adopting drones because most of the drone companies that exist are small mom-and-pop teams who are enthusiasts,” said Sax. “We’ve created a brand that gives peace of mind for big corporations to hire us.”

With this first-to-market approach, the company remains ambitious in its goals. In the next two years, Sky Guys wants to expand its 12-person team to 30 people and establish an office in every province. The company also wants to foster the drone community in Canada by establishing a school for would-be drone operators.

“Culture for us is huge, as a company and in general,” said Sax. “For us to dominate the space, what better than to own and be a part of the community itself? We to train our pilots and every pilot out there, and have that Sky Guys standard of education.”

PointClickCare has received a $186 million from Dragoneer Investment Group, a San Francisco-based investment firm with over $4 billion in capital from partners including…