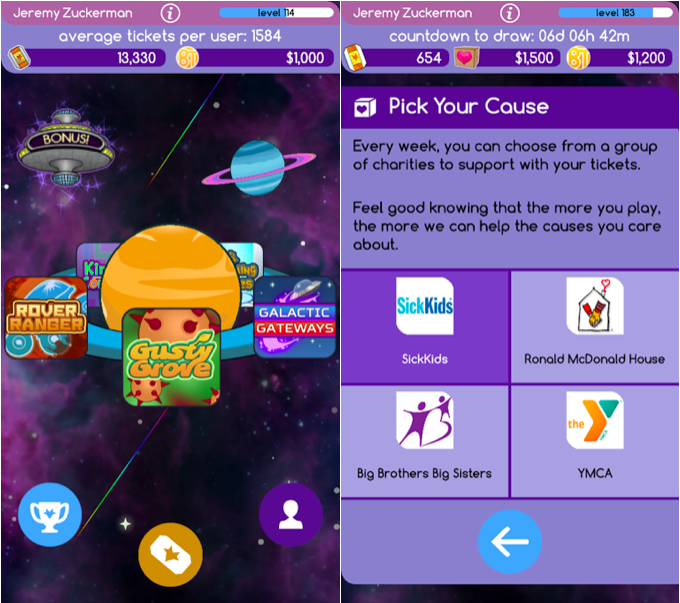 The amount of time playing games on mobile devices has significantly increased. The latest Canadian stat showed gaming as the second most popular activity on smartphones, right behind instant messaging. Thanks to Toronto-based WINR Games and its new app called Big Time, there is reason to feel somewhat good about spending several hours a day engaged playing games on your mobile devices.

Big Time, which is free to download on iOS and Android, is the first ever mobile gaming app that pays gamers to play. Unlike with typical “pay to play” apps, or those requiring expensive in-app purchases to progress to new levels, each point earned by Big Time players are “tickets” into a draw for a weekly cash prize of at least $1,000.

WINR also recently launched Big Time Cares, a charity tie-in that is embedded into the gaming platform. Before game play begins, users are prompted to select one of four charities, and for every ticket earned, a second entry is made to the player’s chosen charity. The charity with the most tickets by the end of the week will receive a donation of at least $500.

To kick off the first donation from Big Time Cares, the company partnered with Newmarket’s Spectrum Educational Supplies who provided a donation of educational Lego valued at $1,000.

WINR Games was started by 26-year-old Jeremy Zuckerman, a McGill graduate who launched it a year ago. While the mobile gaming industry in hyper-competitive, Zuckerman believes this ‘free to win’ model is ahead of the curve and something the rest of the industry will eventually follow.