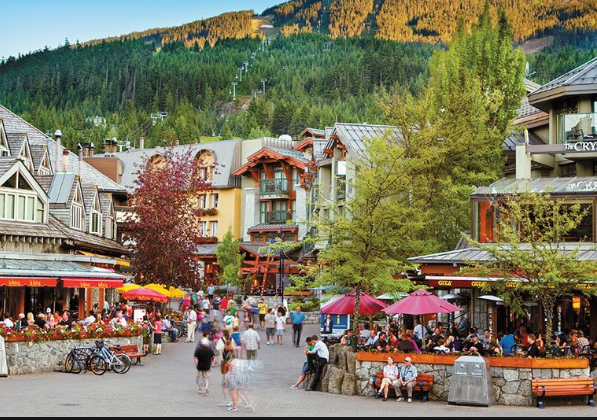 Deb Landa and her yearly GROW Conference was the subject of a recent Financial Post article detailing how next month’s event will represent a big change up from the four previous times.

The founder of Dealmaker Media is both ambitious and energetic, which may explain why she bullishly initiated a change of scenery from GROW’s usual mecca of Vancouver. After all, those around her “warned to expect attendance to fall by half, from last year’s 1,000 delegates, if she moved the conference 125 kilometres up the Sea to Sky Highway.”

But she told the Post that over 800 people are already registered, along with speakers from Yahoo, Misfit Wearables, Under Armour, Google Glass and digital appliance developer SmartThings.

Landa is placing a huge emphasis on the Internet of Thing (IoT) and the connected world. In fact, she said Whistler is a “perfect place to make decisions and iterate,” because of the village’s 400 retailers and 100 hotels along with just 10,000 locals. It’s a lot of small businesses in a small amount of space, and most of them have both an online and offline presence.

So why not bring the popular conference to the BC tourist mecca?

Landa told the Post that she actually approached business and tourism leaders in Whistler to make the village “the world’s most connected community.”

“What might that mean?” wrote Rick Spence. “Use mobile data to create the world’s best customer experience, Landa says. Imagine visitors arriving in Whistler being electronically directed to the closest parking space to their hotel. Imagine checking into your room with a wave of your phone. Scan tonight’s restaurant menus for the best specials, then access all the data on snow conditions, or which bike trails are open.”

On a call last week with BetaKit, Landa revealed that she’s seeking to bring together three pillars of what a connected city needs, in terms of companies.

First, she wants to attract the larger retail successes that have incorporated wearable tech, or companies like UnderArmour, Nike, Lululemon, even Montreal’s Omsignal and Hexoskin to a lesser extent.

Secondly, Landa wants to bring in IoT startups, or companies that focus on physical solutions that merge the offline and online world, giving places like retail stores data about how their customers are acting.  Montreal’s reelyActive and mnubo are both protypical startups in this realm.

Ideally all these companies will converge and collaborate on industry solutions- solutions that retail giants like a Canadian Tire would likely pay top dollar for.

Along with that, Landa wants all of Whistler’s business community to be part of the discussion too. ““I want a big vision,” she told the Post. “We’ll get everyone in the room and say, how can we build a connected resort? And how can we do it in five years?”

With global warming shortening the ski season and considering the village’s aging clientele, Landa told the newspaper that “Whistler must embrace the next generation with always-on information.”

Here’s what Canadians Googled the Most in 2013

Google released its most searched terms of 2013 in Canada, cutely dubbed the “Google 2013 Zeitgeist” (and yes, I think Hegel would be crawling…