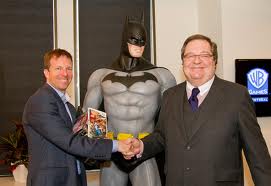 WB Games received a bunch of money from the province of Quebec and it’s ready to make it rain…on 100 new employees and a studio expansion.

It’s not the only company that recently told Canada it’s doors were open for hiring: Vancouver-based social media dashboard creators, Hootsuite, is hosting an open house tomorrow night in their quest to bring on 100 workers.

CTV reported Friday that yet another Quebec gaming company is getting provincial dollars to help accelerate its growth. This time, Warner Brother Games Montreal is receiving $1.5 million, a grant that goes toward a five-year $63 million project that should create 100 jobs and allow the company to buy new equipment in a studio expansion project.

Each job will pay roughly $70,000 a year to employees who are an average of 30 years old. It’s all part of Quebec’s well-known and long-heralded strategy to pump money into gaming companies and reap the economic benefits of what they can bring to a region.

WB Interactive president Martin Tremblay said that by 2018 there should be 500 people employed, “and I think we’ll be one of the best-known studios in the world.”

Premier Pauline Marois, who also announced a $400 million grant for Ubisoft last week, was on hand Friday for the announcement. Finance Minister Nicolas Marceau and Élaine Zakaib, minister responsible for the Quebec Economic Development Bank were also on hand.

For those of us who haven’t heard premier Marois publicly display a knowledge for Quebec’s gaming industry (myself included), she was impressive in answering questions posed by the Montreal Gazette. When their reporter jokingly asked her if video games were part of Quebec’s charter, she said they’re “certainly part of our culture.”

“Gaming is a new art that demands as much creativity as a painting, and is very stimulating not only for our youth but for anyone who’s interested in new technology and multimedia. So it’s part of our culture,” she told the reporter.

She also referenced the fact that Montreal is included in the top three places in the world for multimedia and video game development, along with Japan and California. “That’s no small thing, to compare to those giants. It’s exceptional that we have that here in Montreal.”

Founded in 2010, WB Games Montreal specializes in developing interactive video games and digital entertainment. The company, which is a subsidiary of the American company Warner Bros.. Home Entertainment, currently has 325 permanent employees.