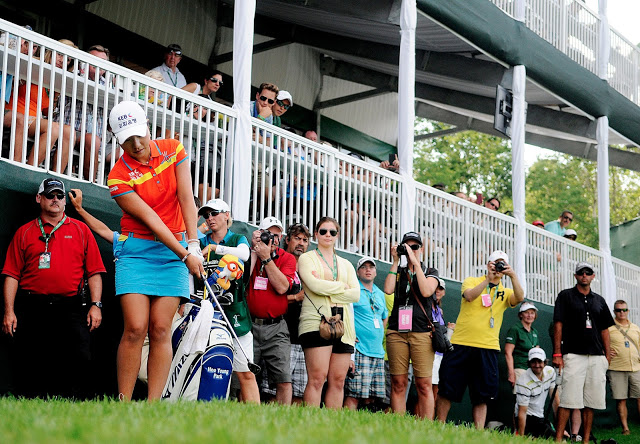 It’s a connected world, according to Waterloo startup StartLight Labs Inc. The company wants to bring hardware beacons, GPS positioning, geofencing and a cloud backend to the live sporting experience.

In CEO James Legue’s estimation, ticket sales at live sporting events are down over the past few years and one way to improve the experience is to use proximity-based technology to bring information to the fans’ fingertips.

At the LPGA Classic, StartLight Labs did exactly that, giving about 1,500 fans instant access on their phones to the identity of the players on the green in front of them, the location of their favourite players on the course, pairing and scores. Users can also see the yardage and par for each hole and tweets related to the tournament.

“We’re looking for better ways at the event to attract people back,” Legue told BetaKit. “The app plays on the Internet of Things (IoT) idea that your phone knows a lot about you know, it knows where you are and using the power of the Internet it can do a lot of cool things.”

That’s what the startup tried to do at a golf tournament, Legue added, “and we recognized what hole you were on and pulled up information on the players in front of you at the time.”

But isn’t there too much distraction in today’s live sporting experience already? Toronto’s Rogers Centre almost certainly comes to mind as one that never fails to throw constant ad-based distractions at its fans, sometimes lessening the sports-viewing experience.

“In today’s world theres too much clutter and noise going on all the time,” he said. “When I go to the game I focus on whats going on, although I do find myself communicating with family and friends sending pictures and what not. One of the things is we want the technology to be there, but to melt away.”

At the LPGA Classic, that’s exactly what Legue said happened. “It served its purpose, gave them the information they needed and then it went away, and I think that’s the key concept. Whereas advertising in a stadium is always in your face and it doesn’t go away. But the idea is of a value-added service that you can use and then it can go away and it won’t bother you.”

Legue coded the technology with two friends from their time studying computer science at the University of Waterloo. The CEO is also a former BlackBerry employee, one of many gifts the embattled smartphone maker left to the Kitchener-Waterloo region, which have started to make themselves known via small startups over the past few years.

For now the plan is to get more customers, and Legue is already eyeing the Canadian Women’s Open in August. He points out that in sports like golf, racing and even tennis, often spectators are left in spots where they can’t see everything. And that’s when StartLight Labs’ technology comes into play.