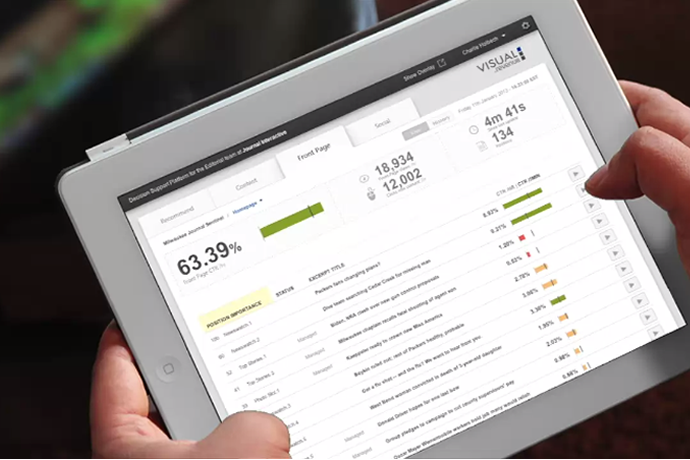 With online publishers not only looking for new ways to monetize, but ways to increase the time readers spend on their sites and the number of articles they read, New York City-based Visual Revenue has gained traction helping editors at publications like CNNMoney, Forbes, and FastCompany understand which articles they should feature on the front page. The big data analytics platform launched in January 2011, and just over two years later is announcing it has been acquired by content discovery platform Outbrain for an undisclosed amount.

Visual Revenue was founded by Dennis Mortensen, the founder of what eventually became Yahoo! Web Analytics, and has an office on the AP newsroom floor. The company has won favor with investors, raising $1.7 million in January 2012, as well as with publishers, currently working with over 250 media platforms around the world including USA Today and NBC Universal. The company reported its highest activity month in February, and now measures more than 13 billion pages on a monthly basis.

The company’s platform predicts how well an article will do on a publication’s front page, and also provides analytics on its past articles, making recommendations on what content should go in which slot. The company also added Twitter and Facebook recommendations last month to provide recommendations to editors on when they should promote their breaking stories on their social media accounts.

The acquisition seems like a natural fit for Outbrain, which provides content recommendations for publishers, letting them install a widget that displays related articles at the end of a post. Publishers can also add a revenue stream by featuring content from other publishers, or they can have their content featured on third-party sites. The company currently serves over 50 million content recommendations per month, and is installed on over 100,000 blogs and online publications, working with 300 premium publishers including Fox News and Rolling Stone.

Mortensen said he’s followed Outbrain for years, and initially reached out to them about a partnership after editors started asking whether Visual Revenue could provide recommendations on where to put their sponsored content. The partnership talks then turned to acquisition discussions in December. Outbrain co-founder and CEO Yaron Galai said in a blog post that Outbrain will use Visual Revenue’s technology to expand beyond recommendations to end readers, now helping editors understand where to position their content. Both companies have the same goal of helping publications increase readership, though Outbrain’s recommendations are placed on a publication’s website, while Visual Revenue is a behind-the-scenes big data platform.

“We do the home page and the section front pages really well…they do below the articles, and they do it so well…we’re not really overlapping here, we’re trying to serve the same people, but on two different channels, them on the article page and us on the homepage,” Visual Revenue’s Mortensen said in an interview.

Visual Revenue’s team of 25 people will join Outbrain, and Mortensen said they are hiring and will continue to build out the platform, focusing on adding customers in Outbrain’s publisher pool right off the bat. Both companies are based in New York City, so the transition will likely be easier, and Mortensen said they will eventually be moving into Outbrain’s offices. In terms of long-term vision, Mortensen wants to add the ability to provide sponsored content recommendations to editors, and combine both products so publications only have to work with one product to get both sets of recommendations.

Launched in 2006, Outbrain’s last round of funding was $35 million in Series D capital in November 2011, and the company will likely make more acquisitions as it looks to beef up its tools to help editors increase readership and revenue. This acquisition seems to be an attempt to expand beyond just on-page recommendations, so it will be interesting to see how it builds out a full suite of tools for media companies in the coming months.