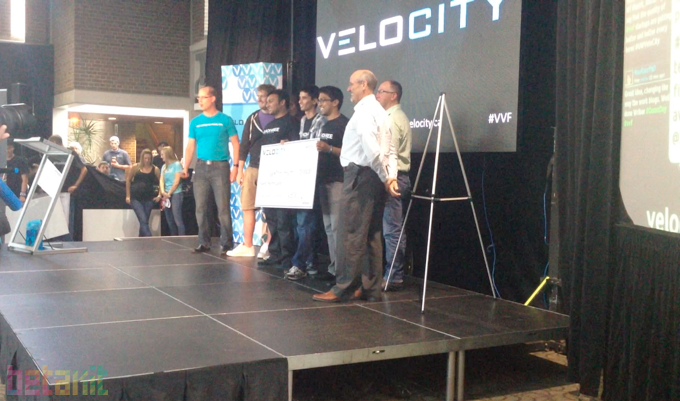 Waterloo is full of mind blowing ideas. This community is quickly gaining the attention it deserves and the people behind these startups are busy solving daily issues, yet tackling larger scale problems.

The University of Waterloo’s VeloCity program hosted their Spring 2013 Venture Fund today. 10 startups took the stage and pitched their idea for a shot at scoring a grant to further launch their product or service. Each had 3-minutes on stage and presented to a packed crowd, plus an esteemed judging panel that included Karam Nijjar, Mike Stork, Cameron Hay and Ted Livingson from Kik.

We previously wrote about each startup here, but the list of pitches were from Blacktree Health, GoPexo, Kite, LibertyBit, Planleaf, Redro, SesameIO, SoundBrush, Tessoll and Wriber. Sitting in the audience and witnessing all the startup pitches were spectacular and all performed incredibly well under pressure. In the end, only four were chosen and evenly split the grand prize of $100,000, each capturing $25,000. The winners were Blacktree Health, Kite, Planleaf and SoundBrush.

In an interview with BetaKit, Mike Kirkup, Director at VeloCity, stated “the quality of the ideas, the quality of the execution, and the biggest element is that the bar is continually being raised.” Kirkup noted that he’s proud off all the startups that come through VeloCity and extremely happy for SoundBrush, an app that’s available on the iPad that allows anyone to easily create and share music simply by touching the display with your fingers. SoundBrush was developed by Jayson Rhynas and Basil Al-Dajane, both have failed to gain funding through VeloCity in the past, but can now claim to be a success. Over the past 3-weeks they’ve seen SoundBrush downloads top 115,000, plus topping the charts in the App Store in several countries.

Blacktree Health is taking on impact of stress and have created a wristband, similar to Nike+, that monitors everything humanly possible, plus presents the information in a way that assists you to improve your lifestyle. Planleaf is an intense project management tool that is heavily built on hashtags and makes your email inbox work for you, not you work for your inbox. Kite has enormous potential and targets developers by giving them the tools to easily manage, build and launch web apps in the cloud.

“The caliber of entrepreneurs coming out of the University of Waterloo and who join VeloCity is nothing short of impressive,” said Kirkup

Nextdoor Adds Another $21.6M, But Can it Meet the Hyperlocal Challenge?

Nextdoor, a social network for neighborhoods that has been growing steadily since its launch, announced today that it has raised $21.6 million in new funding,…