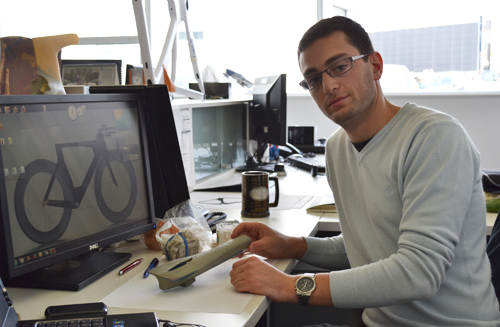 VanHawks, the Toronto startup that hit it big on Kickstarter with is Valour smartbike, has hired former Cervelo Bikes designer Mark Remennik as chief of design.

Cervelo is sometimes referred to by enthusiasts as the “Porsche of bikes,” and it calls their cycles the world’s fastest and lightest. Remennik will now join VanHawks after six years as Cervelo’s lead industrial designer.

“Our cities are growing faster and faster, we need to solve the inevitable phenomenon of urban congestion. Vanhawks is at the forefront of tackling these problems with innovative products,” said Vanhawks CEO Sohaib Zahid. “Mark not only brings an in-depth understanding of the industry, but an impressive portfolio of products. His passion for urban transportation that is reflected in his accomplishments.”

The company said that Remennik will “refine the initial design of the Vanhawks Valour for production and introduce the future of urban transportation to the world.”

At Cervelo he helped design some of the worlds most advanced bicycles, combining Aerodynamic, Composite and Structural Engineers’ R&D work into “beautiful, user centric consumer products.” His team designed such notable models as the P3, P5, S5, and the R5CA. The P5 went on to win Triathlon Business International’s most innovative triathlon product of 2012 award. In addition to Remennik is also an instructor at OCAD University in Toronto.

“The Vanhawks Valour represents a new era of urban transportation, solving some of the fundamental problems of getting from point A to B in urban centres.” said Mark. “I think this is well represented in the incredible response the Kickstarter campaign received. The Valour seamlessly marries innovations in the traditional design elements of the bicycle with groundbreaking connected features. Clearly the project has captured the imagination of our backers as they were willing to put down more than $1000 to help make it a reality.”

The Valour is available for pre-order for $1249 for single speed and $1499 for multi-speed.

We last checked up on Vanhawks in May, when the company’s bike “blew by” its initial crowdfunding goal.

Ask an Investor: What happens if the partner who led my deal leaves the firm?

We’ve written in the past about the importance of optimizing for the specific VC you’ll be working with, rather than for the brand name….