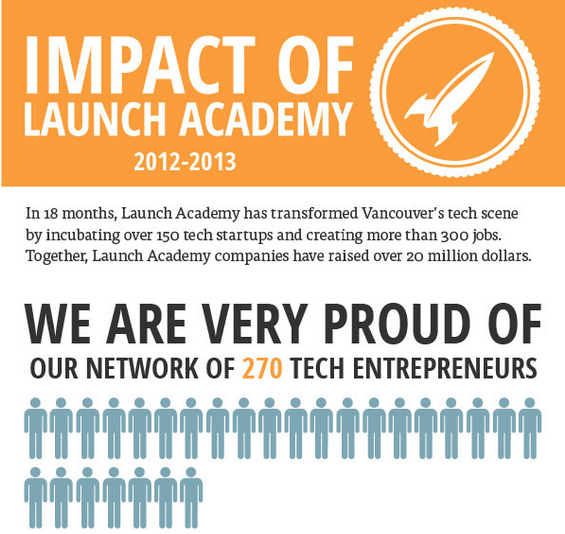 Vancouver-based Launch Academy recently released an infographic detailing some of the stats revolving around the incubator-coworking space’s last 18 months.

Among some of the highlights was that Launch Academy companies raised over $20 million and created over 300 jobs for the province of British Columbia, 60 percent of which were created while working at the space. 92 out of the 153 companies that worked out of Launch Academy were surveyed.

See Where Launch Academy Placed in the BetaKit 10 for 2013: This Year’s Top Ten Winners in Tech

“We are very proud of Launch Academy’s results over the past 18 months, with support being offered directly to over 270 tech entrepreneurs through memberships, and thousands more via our events and activities,” wrote the organization. “Launch Academy members have collectively raised over $20,000,000, with over 10% of our startups moving forward into an accelerator!””

Launch Academy recently signed partnership deals withMicrosoft Ventures and the Business Development Bank of Canada (BDC), both of whom will help out entrepreneurs working at the space.

Led by Ray Walia and Mike Edwards of LX Ventures, the space features a diverse group of innovative startups across some of the fastest growing trends, including Cognilab, Picatic, Shnarped Hockey, Instaradio, Retsly and more.