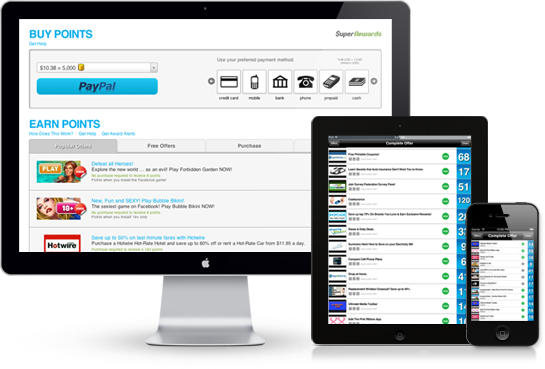 We chatted with SuperRewards president Lyal Avery, and while he couldn’t give us an exact dollar value on the sale he did point out that the Munich-based Pay by Shopping (also known as Deal United) formerly raised over $6 million over three rounds of funding.

Acquired by Playerize in 2012, SuperRewards was established in the summer of 2007 shortly after the Facebook platform launched, as a web advertising company that offers points and rewards to web users who sign up for services. It was an in-house tool at first, experiencing “explosive growth,” quickly becoming the largest CPA network on Facebook, Myspace and beyond.

Now it has acquired its third different company. Avery called the Pay by Shopping buy “an excellent opportunity to provide more value to our existing publishers while keeping a great European brand alive.

Moreover, the president said SuperRewards already has strong business in Europe, and the acquisition means “a new method of offers on our existing wall, and direct advertisers from major European brands.”

Pay by Shopping, meanwhile, is a tool to reach new customers, increase website traffic, and to raise conversion rates. Available on browser games, via Mobile, and as a Facebook-App, Pay by Shopping enables users to earn virtual currency and items, such as rebates, from a publisher by shopping at an advertiser. It drives incremental revenue for publishers while at the same time serving as a performance marketing tool for online Advertisers. For advertisers, they gain new customers and see increased sales.

As for what the acquisition spells out for SuperRewards, Avery said the company is currently looking at a compelling opportunity in the consolidation of loyalty ad technology and payment companies.

“We’re pushing forward with a bunch of new products and initiatives, from alternative payments to user engagement products, that will allow publishers to increase revenue while giving users a better experience.”

Back in 2009,  Adknowledge paid $50 million to buy Super Rewards, but its founder Jason Bailey (a GrowLab cofounder) bought it back and eventually sold it to Playerize.