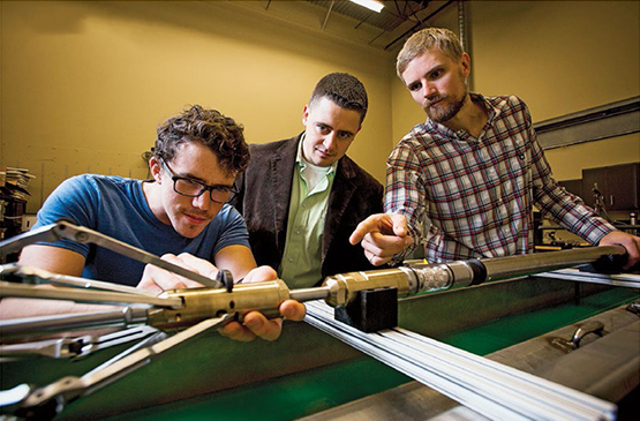 Vancouver-based DarkVisionannounced $8 million in Series A funding, in a round led by BDC Capital, Sustainable Development Technology Canada, and Evok Innovations from their $100 million cleantech fund. The investment is a first for Evok Innovations, an investment partnership between Canada’s oil and gas companies — including Suncor Cenovus — and the BC Cleantech CEO Alliance to fund and accelerate the development and commercialization of energy solutions.

The news was announced by Minister of Innovation, Science, and Economic Development Navdeep Bains at DarkVision’s headquarters. The company plans to use the funding to go to market and build out their technology and IP.

“We’re excited about having both BDC and Evok join our investor group at this critical point the company’s trajectory,” said Stephen Robinson, DarkVision CEO and co-founder. “Both funds presented a great fit for our current and future capital needs, and we’re excited about DarkVision’s growth path moving forward with our new partners. Our team has been hard at work packaging our imaging technology into a field-ready downhole tool, and is looking forward to initial customer deployments later this year.”

Angel investor Jonathan Bixby, who participated in the round, said that what attracted him to the company was his previous relationship with the management team, who exited their former camera inspection device manufacturing company, Clearvision, to Valco in 2011. “I also firmly believe that their technology is incredibly innovative and addresses a massive need in a really large market,” he said.

DarkVision is developing a super high-resolution ultrasound-based imaging technology to give oil and gas companies a look inside their wells that are unimpaired by wellbore fluids. In September 2014, the company won $100,000 in the BCIC-New Ventures competition.

“DarkVision has developed a technology that solves a fundamental problem for oil and gas wells, and has attracted a lot of interest from several of the industry’s largest players,” said Marty Reed, CEO of Evok Innovations. “The value proposition of DarkVision is a natural fit for Evok and made the investment an obvious choice for us. We were impressed with the company’s track-record of success and strong management team. We are proud to make DarkVision Evok’s first investment.”

Reed and Geoff Catherwood, partner in BDC Capital’s Industrial, Clean and Energy (ICE) Fund, will be joining the company’s board of directors along with Bixby, who acts as chair.

A|I: The AI Times – The year AI floated into the cloud