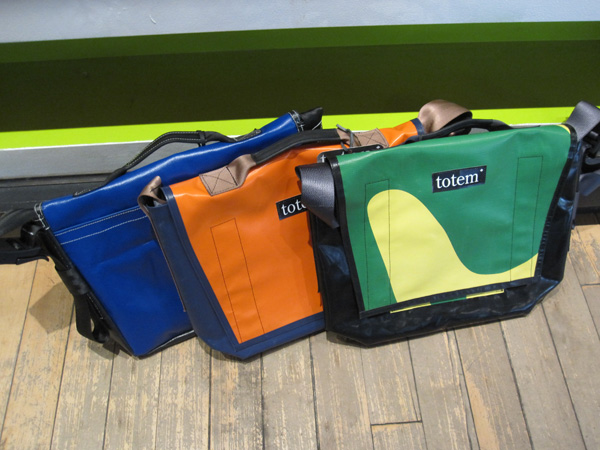 One person’s trash is another person’s treasure, and for Melissa Richardson, there’s treasure lining the streets of Toronto. Richardson is the founder of Totem Bags, which she started in 2009 while she was pregnant with her first daughter. After hearing about a company in Switzerland that created bags from recycled truck parts, the self-proclaimed “bag lady” taught herself how to sew.

Totem Bags now has 50 corporate clients, an ecommerce store, and can be found in 50 retail locations across the country. After spending its first two years operating out of Richardson’s basement, she and her four employees now work from their own manufacturing facility.

Richardson, who was recently awarded Entrepreneur of the Year by the Oakville Awards for Business Excellence, says the company has grown 86 per cent over the last twelve months.

Totem Bags also practices the environmental sustainability they preach in their day-to-day business operations. For example, Richardson takes advantage of paperless billing with the help of Rogers, her longtime wireless service provider. She leverages tools from Rogers that allow her to run her online store, totembags.ca, as well as the company’s popular social media channels, from just about anywhere.

“This phone is my lifeline to Totem Bags,” she says. “I’m on my phone all day, whether I’m sending emails to my customers, communicating with the shop, taking orders or taking pictures of our bags to send directly to customers who are deciding on a purchase.”

“The services Rogers provides can be customized to serve my needs as a small business,” she says. “They understand that, and they have been working with me to help customize a plan that is well suited for what I do.”

Richardson adds that when it comes to environmental sustainability, she doesn’t need to look far for motivation.

“I’m a mother of two darling babies, a two year old and a four year old, and I think everybody should be making a conscious effort towards the environment, keeping it as clean as possible for younger generations,” she says.