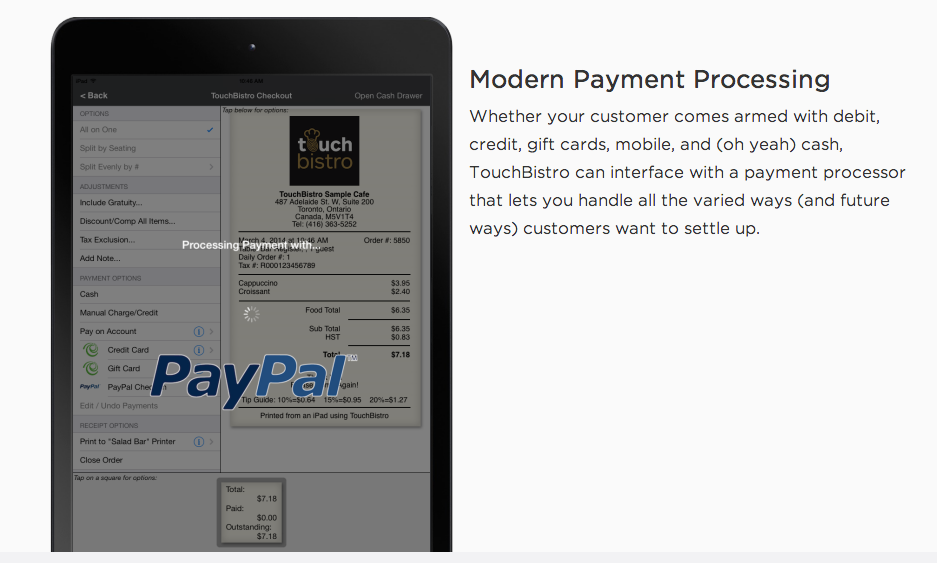 In November Toronto’s TouchBistro, the company that facilitates tablet-based payments at restaurant checkouts, raised $4.5 million in seed funding. Today the company is announcing that the round has been increased to $6 million, originally lead by Walden Venture Capital and Kensington Capital Partners.

TouchBistro processed approximately $500MM in transaction value in 2013 from more than 1,000 merchants, including full service restaurants, quick service restaurants, food trucks, coffee shops and other food and drink venues. The company brings “mobile innovation to the food and beverage industry,” providing a modern point-of-sale (POS) solution with smart features, integrated with different payment processing options, at a lower cost. Servers use the TouchBistro iPad app to take tableside customer orders, and instantly submit them to the kitchen and bar. It’s supposed to eliminate the need for servers to enter a customer’s order into a separate, distant terminal, which minimizes order errors and increases operations efficiency.

“With this injection of funding, TouchBistro now has the backing of three highly respected and top performing venture capital firms, and is very well positioned in the food and drink industry,” says Alex Barrotti, CEO of TouchBistro. “We are seeing tremendous momentum in this market, reinforced by some very encouraging market research. This translates into a huge opportunity for TouchBistro.”

Since launching two years ago in the iTunes App Store, TouchBistro POS has been ranked as the top grossing food and beverage app in 27 countries.

The company wants to double its customer base in the next 12 months (which every company would love I’m sure), but when companies announce these plans it usually indicates that the goal can be achieved.

“We are already well on our way to achieving the lofty goals we’ve set for the year,” said Barrotti. “In January we opened our New York City office. We also achieved a 34% increase over our previous record of new customer signups in a given month.”

Vancouver-based ‍Ziva Dynamics, a startup that develops character simulation software for the film and entertainment industry, has raised a $9.8 million CAD ($7 million…