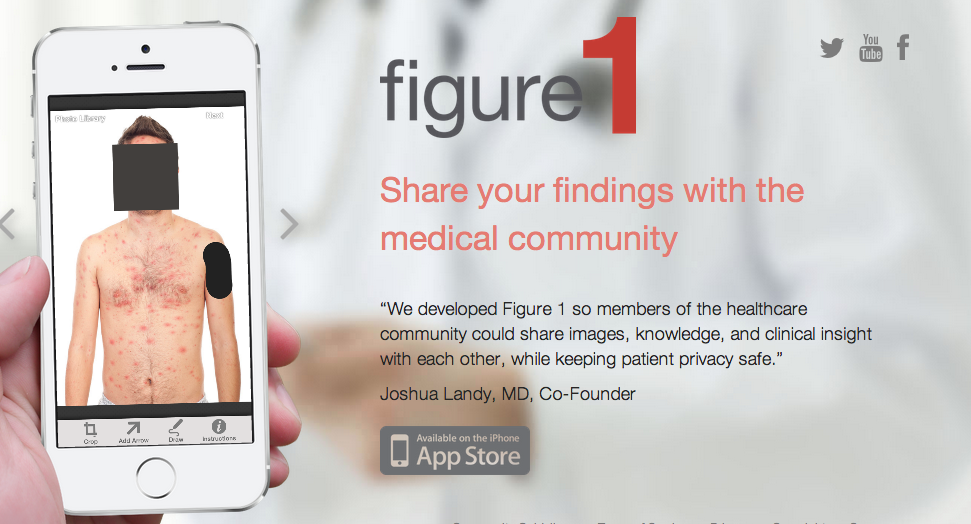 Toronto-based photo sharing service for medical professionals, Figure 1, has raised a $2 million seed round. The app allows health care professionals to upload and share strange, fatal, and sometimes even gruesome images of things that can happen to the body.

Version One Ventures and Rho Canada Ventures co-led the round, which included participation from the Investment Accelerator Fund and several angel investors, including Zen Chu (Founder of Accelerated Medical Ventures and Faculty Director at MIT’s HackingMedicine), Daniel Debow (Co-Founder of Rypple, acquired by Salesforce.com) and DMZ Investments, a seed-stage fund established by Ryerson Futures.

“We congratulate Figure 1 on their early growth since launching in May of this year and look forward to working with them as they leverage this funding to fuel their expansion,” said Matt Saunders of Ryerson Futures Inc. “Gregory and his team were a pleasure to work with in the early days of developing Figure 1. Ryerson Futures is excited to provide continued support for startups and help them make valuable industry connections.”

Figure 1 is building the world’s largest free repository of medical images that’s easily searchable and available to the medical community.  It is a mobile, crowdsourced platform that allows healthcare professionals to upload and tag images, use each other’s images for information, and rate images for accuracy or clinical representativeness. All of this is accomplished in line with government and hospital privacy and ethics requirements. Figure 1 was founded in early 2013 by Joshua Landy, a critical care physician, Richard Penner, a mobile developer, and Gregory Levey.  Dr. Levey is also an Associate Professor in the School of Professional Communication at Ryerson University.

One National Post article said that “seems to be a great tool for sharing medical “pearls,” seeking help on puzzling cases and just bringing together physicians.”

The startup launched in North America in spring 2013 and quickly reached the top spot in the medical category on both the US and Canadian App Stores. It expanded to the United Kingdom in fall 2013, and is already used by tens of thousands healthcare professionals in the three countries. The app is currently available on iPhone and iPad and will be expanding to Desktop and Android in the coming months.

Last week the company attended 48 Hours in the Valley, a program sponsored by the C100 that bought 17 Canadian startups to Silicon Valley for two days of mentorship, workshops and networking. Those startups selected are labelled as ““Canada’s most promising startups” by the C100.

“Founding our company at the Digital Media Zone helped us benefit from the entrepreneurial spirit at Ryerson,” said Figure 1 cofounder Gregory Levey. “The collaborative environment of the DMZ, along with the financial support and mentorshipprovided by Ryerson Futures allowed us to focus completely on building a product and getting our company off the ground.”