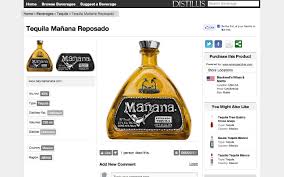 Spirits- no, not those things from Poltergeist that fly around your great aunt’s house at night, but rather, distilled beverages. The technique and culture that surrounds spirit making has played a part in the family history of Toronto-based entrepreneur Marc Molinaro, and as a result he and two cofounders built an online catalogue and community devoted to spirits, called Distilus.

The site features profiles of 1,921 different distilled beverages and their creators, providing detailed information like country of origin, alcoholic volume and the year it was distilled. “With the passion of our community we have now become the most comprehensive archive of distilled alcoholic spirits,” said Molinaro. “Our site has evolved into a full scale beverage community and culture group, bringing together professionals all united by this lifestyle. We strive to be the best and most visited group for people interested in the world of drink.”

Molinaro and cofounders Nicholas Ajram and Robert Rende coded, designed and marketed the site after its launch in 2011, and the trio has watched the site’s popularity grow. It averages between 5,000 and 10,000 unique visitors a month and sports over 3,000 fans on its Facebook page, but it’s more of a hobby project for the three guys.

“It was initially conceived at the Ted Rogers School of Management at Ryerson University, from attending a lot of entrepreneurship classes, and I had been in involved in a lot of home brewing and distilling,” Molinaro told BetaKit. “We kinda had this idea to represent all of these brands that we discovered, and to share, promote and spread the world about craft brewing, home distilling and the preservation of the history of all this stuff.”

It’s an impressive database that holds information about pretty much every distilled liquor you can think of, from obscures like Francoli Grappa Sorsi di Erbaluce to well-knowns such as Smirnoff Red Label Vodka. The cofounders, all having attended school at either Ryerson or the University of Waterloo, are partly motivated by the L.C.B.O, Ontario’s government-controlled liquor board, otherwise known among Ontarian as “The L.C”. Selection is controlled, as is price and as a result, for serious spirit aficionados like Molinaro, its leaves much more to be discovered and acquired. He wants to show the people of Ontario “what else is out there.”

The site is currently completely not-for-profit, and all three cofounders currently work full-time jobs. For now Distilus serves primarily to promote and revive the home distilling industry, but that could change. In terms of monetizing, the team could implement ads, subscription rates, complete profile rates for brands or even serve as an ecommerce play for spirits unavailable in Ontario. It could even sell data based on whatever spirits are netting the best analytics. But that’s not a worry currently.

“The motivation to potentially preserve this stuff, discover it and to educate people on how much work goes into make these spirits is the real passion,” said Molinaro. “We have one of the biggest databases solely dedicated to distilled spirits that I’ve ever found online. That’s something that really motivates you.”

For the third year in a row, applications are being accepted for the 43North startup pitch competition, a competition awarding up to $5 million…