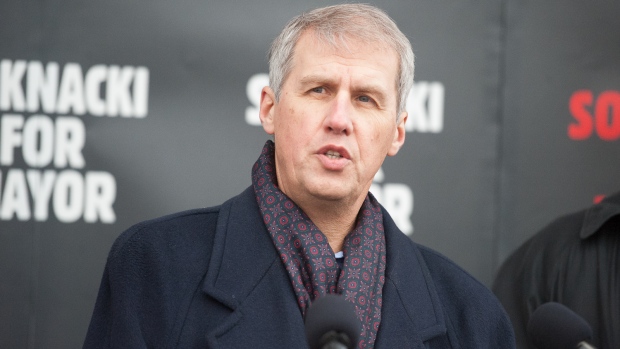 Central to Soknacki’s platform is his “innov8TO” initiative, which would pair individual City of Toronto departments with up to eight startups selected through an annual competition.

Similar partnerships in other world class cities have produced a range of new ideas, services and
applications. For example, in just the last year, San Francisco partnered with a startup to improve
the City’s emergency communications grid. New York City partnered with a small firm to make
it easier and cheaper to publish City financial data. Transport for London used a competition to
develop software to make transit route planning easier for passengers with disabilities.

The 2014 Toronto mayoral election is October 27, still four months away.  Soknacki is a municipal politician in Toronto. He was a councillor in Scarborough from 1994 to 1997 and then served as a Toronto City Councillor from 1999 to 2006 representing Ward 43 in the western half of the Scarborough East riding.

“The solutions to 21st Century civic problems are often found through better ideas, not bigger
budgets,” he said. “I want to engage this city’s talented population of coders, engineers and
social innovators to help us grow our startup community and improve public services.”

His innov8TO platform rests on a few key pillars that revolve around increased access to public information and open data.

1. “Lead the world in data transparency. As Mayor, Soknacki would ensure Toronto’s
government measurably discloses more datasets at accessible standards than any other
comparable city in the world by January 1, 2018. To support this goal, Soknacki’s final
campaign platform will fully cost support for a new digital innovation staff unit.”

2. “Make government data easier for coders and citizens to use. Toronto’s existing
Open Data releases often have limited value because the data isn’t in a usable format,
or it isn’t presented in a way that’s friendly for casual review by ordinary citizens. As
Mayor, Soknacki would enforce a two-part standard for data releases to be both coder-
and citizen-friendly, as seen with New York’s presentation of financial data.”