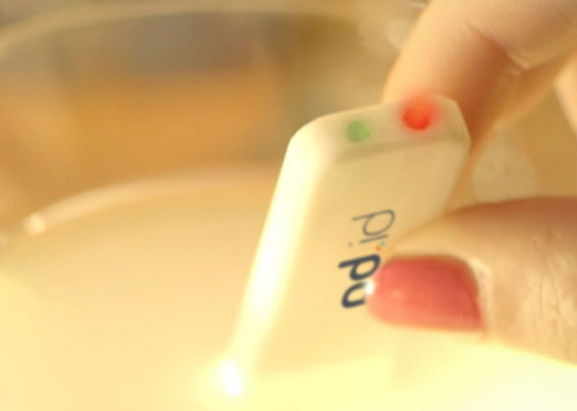 A Toronto man’s new tool that can detect whether a drink has been spiked with potential date-rape drugs is nearing the end of its crowdfunding campaign on Indiegogo.

David Wilson, a 14-year cancer survivor, created the “pd.id,” which is roughly the size and shape of a USB drive. It can be dipped into drinks to decipher whether any unusual chemical properties lie within. The small tool contains drug-detection hardware and a database of chemical signatures for common date-rape drugs. The ID warns a drink-sipper of drugs via an LED display.

Wilson shifted his career from technology, where he had founded two specialized computer integration companies, to nuclear medicine, where he helped introduce new cancer imaging technology to Ontario and collaborated on the design of a next generation molecular imaging breast camera.

“Because of the work I had been doing in breast imaging and things like that, a lot of women would be more candid with me with what was going on in their lives,” Wilson told the Toronto Star. “I started getting a lot of a stories saying, ‘Hey, this happened to me.’”

Metro Toronto said the battery-powered pd.id device purports to work by running three kinds of simultaneous tests on the beverage, studying ultraviolet light, temperature and electrical current responses. As well, the startup is also building out a user-generated database of where these incidents seem to be happening the most, which would effectively crown certain bars as more date-rape prone.

The pd.id is still in a prototyping stage, given that the crowdfunding campaign still isn’t over. A full roll-out of the product isn’t expected until next spring.

And unfortunately for Wilson and his cofounder Daniel Pirvuti, a Technical Solutions Architect, the campaign has reached only $25,000 of a targeted $50,000. Six days remain for backers to help out the small Toronto team.

Within the category of anti-date rape technology, this week was revealing. The Toronto Star reported on Thursday that students from N.C. State University have created nail polish formulated to change colour if drink-sippers dip their finger in a drink spiked with one of several incapacitating drugs, like GBH, Rohypnol or Xanax. The startup is called Undercover Colors, and its slogan is “The First Fashion Company Empowering Women to Prevent Sexual Assault.”

Unfortunately for the students, they’re now being accused by anti-rape activists in Baltimore for implying victim-blaming.