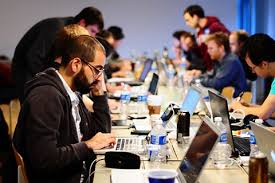 The #HackingME hackathon in Toronto later this month will seek to create positive change in the Middle East while providing a avenue for local programmers to get together and do a bit of coding.

From June 20-22 HackingME (ME stands for Middle East) will bring together software developers, designers, experts in middle eastern politics, history, governance, culture (and many other areas) to build solutions for positive social change in the middle east.

The mission for the event is to “bring together a community with a diverse set of skills to collaborate and work on ideas for positive social change in the Middle East.”

“We hope to bring together Software Developers, Graphic Designers, User Interface Designers, Project Managers and Middle Eastern domain experts for a full-weekend to work on projects with a focus on improving aspects of the middle east,” wrote the organizers. “Project ideas are decided by event participants and can be joined by anyone who feels passionate about that project. The HackingME Hackathon aims to foster rapid innovation and collaboration in a weekend.”

Founder Henry Zaccak started the hackathon after a 2011 trip to Beirut, Lebanon to teach English to children living in both Burj el Barajneh and Shatila Palestinian refugee camps. While living in the camps he experienced the poor social conditions in which the refugees lived, including overcrowding, a lack of clean water supply and electricity, a large percentage of school drop-outs and a low employment rate. Zaccak created the new Toronto-based Hackathon in order to discuss and develop solutions to current social issues in the Middle East.

Judges for the event are Leila Boujnane, cofounder and CEO of Idée Inc, a firm focused on large scale image search, and Ramzi Jaber, the cofounder of Visualizing Impact, a interdisciplinary organization that specializes in data visualization and journalism, creating visual stories on social justice issues.

The grand prize includes $500 in gift cards (that’s $100 each person if its a five person team) and HackingME t-shirts.

Any geeks interested in joining the hackathon can get 15 percent off until Saturday when they use the code NEXT2.