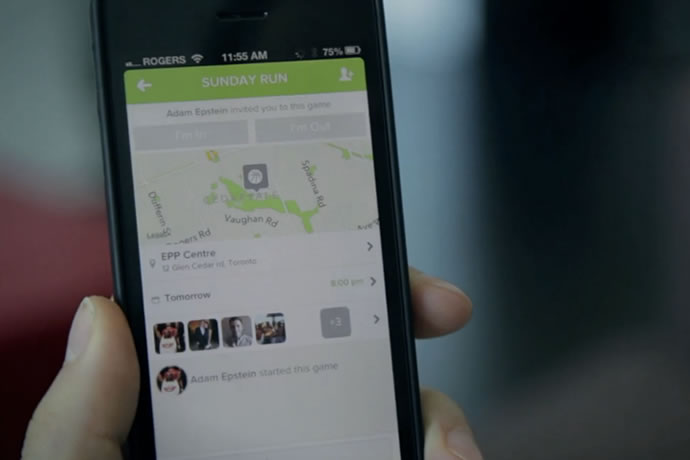 The summer months beckon for pick-up games, be it on a basketball court or a football field. There is something refreshing about entering a game with strangers, finding your rhythm, and leaving with friends.

Huddlers for iPhone is a new app from Toronto-based startup of the same name that allows people to set up pick-up games for a number of sports, from dodgeball to tennis to lacrosse. To keep things organized, users can select up to five sports to track, and connecting to Facebook helps facilitate invitations to known persons.

The app also consolidates open invitations based on area, so if you’re located in downtown Vancouver and are looking for a game of street hockey, it’s possible to find one (if anyone in Vancouver plays street hockey during the summer).

Huddlers began its life last summer as a web app, and only recently released an iOS app. The company’s founder and co-owner, Adam Epstein, said that the move to mobile was inevitable, though. “Sport is a mobile phenomenon, and a huge opportunity,” one that he thought was untapped in the marketplace.

Still bootstrapped, Huddlers is launching internationally this week — it started as a Toronto-only product — and the company has grand ambitions that it plans to enact by raising funds. The iPhone app is just the beginning, too: an Android app is expected by the fall, and a revenue model is on the map, which involves being the facilitator for splitting equipment and rental costs between team members.

Though the iPhone app is a slight pivot from Huddlers’ initial focus as a social network for sport enthusiasts, Epstein said the reevaluation of what the product was good at became invaluable to its eventual repurposing. He found that, while people loved the badges and encouraging remarks, most members were using Huddlers to facilitate matches.

The five sport limit was another natural evolution of the transition to mobile. “We wanted Huddlers to be a mobile-focused productivity tool,” said Epstein, cribbing the app’s design from other brand name favourites like Path, Gmail and even the new (excellent) Sunrise social calendar app.

Now that Huddlers has gone international, the focus is on improving the core experience and acquiring more users. At the moment, the network has set up a few hundred games, mostly pick-up basketball in the Toronto area, but aims to expand the user base from 1,000 today to many thousands in the coming months.

To do that, and to have a seamless experience, Epstein understands that an Android app is necessary, but they are a small team and don’t want to rush into it. Non-iOS users can still be invited to games, either by text or through email, as there is a nice, clean mobile webpage individually generated for each game and invited user.

Key to the expansion process was access to Foursquare’s growing Venues API, which allows anyone, practically anywhere in the world, to find gyms or arenas in which to set up a quick match or meeting spot. Epstein was keen to point out that while Huddlers is not yet localized for other languages, the design preferences icons over text, largely negating language as an issue.

While there are similar services out there — Red Bull Playgrounds comes to mind — none are as focused and accessible as Huddlers.