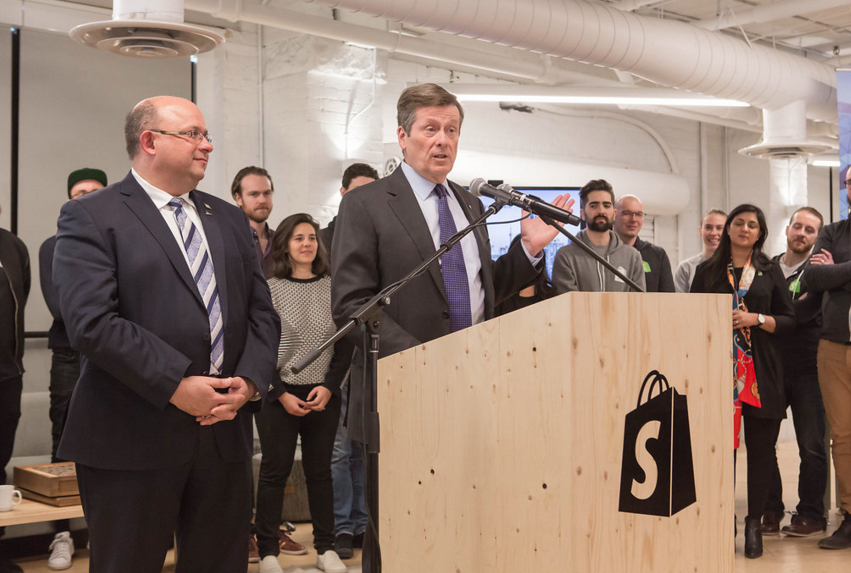 Toronto mayor John Tory and Kitchener mayor Berry Vrbanovic are enthusiastic advocates for both of their cities’ startup communities. Mayor Tory regularly speaks both to and on behalf of startups, and the mayors have been vocal about the need for more reliable transit between the KW-Toronto corridor.

“Shopify has massively benefited from the wealth of talent and diversity here in Toronto.”
– Satish Kanwar

At Shopify’s office in Toronto this morning, the two mayors gathered to announced a collaboration between both cities and their respective startups communities, with a commitment to championing these communities and coming up with initiatives to foster innovation. That commitment includes StartUp Here, a new portal highlighting the best of startup news coming out of Toronto.

“Shopify has massively benefited from the wealth of talent and diversity here in Toronto; this is the business and tech capital of our country,” said Satish Kanwar, Shopify’s director of product that was named as one of Forbes’ top 30 under 30. “This is home to leading colleges and universities, and it’s a stone’s throw from Kitchener-Waterloo, where we recently set up shop. It’s this type of growth that wouldn’t be possible without the collaboration we see between public and private and leadership that is championing innovation, ideas, and talent here at home.”

The StartUpHere brand came via Toronto’s partnership with Cossette, an advertising agency, to officially brand the city’s startup ecosystem.

“We’re not telling our story enough. It’s such a typically Canadian, Torontonian thing for us to kind of say ‘Oh well, we’re in the business of startups and we have a lot of smart people. But we’re nowhere near as good as where they are somewhere else’,” said Mayor Tory. “I recognize that this is going to have to happen as a partnership. Government alone can’t do very much when it comes to innovation. We can embrace it and we can incorporate into the way we do business, but in the end our job is to create an environment to let you flourish.”

While no concrete initiatives coming out of the partnership have been announced yet, the mayors hinted at the pressing issues they’re focused on, including transportation, attracting more international venture capitalists to the region, and updating outdated regulations.

“Currently, our biggest barrier to unlocking this opportunity is the lack of ambition for proper transit between our two regions,” said Vrbanovic. “The distance between Toronto and Waterloo region is approximately the same as between San Francisco and San Jose in the Silicon Valley. What they have that we don’t is efficient and effective transit.”

Speaking with BetaKit, Chris Rickett, manager of entrepreneurship services for the City of Toronto, said that this partnership has been in the works since last year when Toronto city council officially approved a startup ecosystem strategy to help support startups. “We heard that we need to better tell our story, so we at the city pulled out partners like MaRs, DMZ, Shopify, and Cossette and developed the brand and launched the web platform to aggregate and tell that story.”

Wealthsimple to expand into crypto trading

Wealthsimple is set to expand into the cryptocurrency trading space with the launch of Wealthsimple Crypto. The new product offering will provide commission-free trading…